(CNN) -- World leaders have condemned the terrorist attacks in Mumbai, India, in which more than 100 people died. 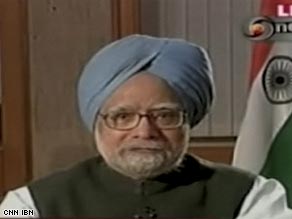 Indian Prime Minister Manmohan Singh said the attacks were intended to create a sense of panic.

Indian Prime Minister Manmohan Singh deplored the attacks, saying they were well coordinated and apparently launched by people from outside the country.

"The well-planned and very orchestrated attacks, probably with external linkages, were intended to create a sense of panic by choosing high-profile targets and indiscriminately killing innocent foreigners," Singh said in a televised address to the nation. "It is evident that the group which carried out these attacks, based outside the country, had come with single-minded determination to create havoc in the financial capital of the country."

Singh promised "the strongest possible measures" to stop a repeat of such acts. "We will take up strongly with our neighbors that the use of their territory for launching attacks on us will not be tolerated and that there would be a cost if suitable measures are not taken by them."

He did not refer to a specific neighbor, but India has frequently blamed Pakistan for harboring militants. "We will take a number of measures to strengthen the hands of our police and intelligence authorities. We will curb the flow of funds to suspect organizations. We will restrict the entry of suspects into the country. We will go after these individuals and organizations and make sure that every perpetrator, organizer and supporter of terror, whatever his affiliation or religion may be, pays a heavy price for these cowardly and horrific acts against our people."

A statement on behalf of Pakistan Foreign Minister Makhdoom Shah Mahmood Qureshi said: "Terrorism is a menace threatening humanity and humanity should join hands in fighting this scourge. Pakistan condemns terrorism in all its forms and manifestations. Pakistan itself has suffered because of terrorism and sacrificed much in fighting this threat. The foreign minister also expressed deep condolences with the bereaved families."

A spokesperson for U.N. Secretary-General Ban Ki-moon said: "The secretary-general condemns the rash of shootings and blasts in Mumbai today, which killed and wounded a large number of people. Such violence is totally unacceptable. The secretary-general reiterates his conviction that no cause or grievance can justify indiscriminate attacks against civilians. He calls for the perpetrators to be brought to justice swiftly. "The secretary-general sends his deepest sympathies to the families of the victims and the wounded and expresses his solidarity with the people and government of India."

U.S. President-elect Barack Obama's chief national security transition spokeswoman Brooke Anderson said: "President-elect Obama strongly condemns today's terrorist attacks in Mumbai, and his thoughts and prayers are with the victims, their families and the people of India. These coordinated attacks on innocent civilians demonstrate the grave and urgent threat of terrorism. The United States must continue to strengthen our partnerships with India and nations around the world to root out and destroy terrorist networks. We stand with the people of India, whose democracy will prove far more resilient than the hateful ideology that led to these attacks."

British Prime Minister Gordon Brown said: "These outrageous attacks in Mumbai will be met with a vigorous response. I have sent a message to Prime Minister Singh that the UK stands solidly with his government as they respond, and to offer all necessary help."

In a letter to Cardinal Oswald Gracias, the Archbishop of Mumbai, Pope Benedict XVI says he is "deeply concerned" about the attacks. The pope asks that the archbishop "kindly to convey his heartfelt condolences to the families of those who have lost their lives in these brutal attacks, and to assure the public authorities, citizens and all those affected of his spiritual closeness. His Holiness urgently appeals for an end to all acts of terrorism, which gravely offend the human family and severely destabilize the peace and solidarity needed to build a civilization worthy of mankind's noble vocation to love God and neighbor. The Holy Father prays for the repose of the souls of the victims and implores God's gift of strength and comfort for those who are injured and in mourning."

In a statement NATO Secretary-General Jaap de Hoop Scheffer has said: "I condemn in the strongest possible terms the mindless and indiscriminate terrorist attacks in Mumbai. Attacking innocent people, tourists and patients in hospitals is despicable and cowardly. On behalf of the Alliance, I am relaying the sincerest words of solidarity and sympathy to the Indian authorities, to Indian people and especially families of the victims. NATO, as part of the international community, is determined to spare no effort to fight the scourge of terrorism which should have no place in the 21st century."

Afghan President Hamid Karzai said: "The government and people of Afghanistan stand by India in the aftermath of this horrific and inhuman act of terror. Nothing is more heinous and deplorable than taking the lives of innocent people in such a cowardly attack on public places. ... Terrorism is a threat to us all, affecting India, Afghanistan and the region. Responding to this threat requires nothing less than a joint strategy to defeat this menace."

Japanese Chief Cabinet Secretary Takeo Kawamura said: "The Japanese government disapproves of any act of terrorism, and we emphasize that there is no justification for any act of terrorism. We wish that the people of India will quickly be able to overcome such suffering. Japan and India will continue to work closely to fight against terrorism."

Chinese Premier Wen Jiabao sent a message of condolences Thursday to Indian Prime Minister Manmohan Singh. He said the Chinese government "strongly condemned" the attacks and that China is "firmly opposed to terrorism of any form." The Xinhua news agency reported, "On behalf of the Chinese government and himself, Wen expressed deep grief for the victims of the attacks and conveyed sincere condolences to the relatives of the victims and those wounded in the violence."

In a statement European Union Foreign Policy Chief Javier Solana said: "I condemn in the strongest possible terms the heinous terrorist attacks throughout the city of Mumbai. I convey my most sincere condolences to the families of the victims and my sympathy to the Indian authorities. To those who were injured, I wish a speedy recovery. These acts show once again the need for the international community to stand united against terrorism and fight it with determination."

Sri Lankan President Mahinda Rajapaksa said: "My government and I hasten to condemn most vehemently the brutal acts of terrorism that killed more than 100 persons and injured many more in the attacks carried out in the Indian city of Mumbai last night. Our thoughts to go out to the families of those killed and injured and in these acts of terror; we express our deepest sympathies to the families of the deceased and wish a speedy recovery to those injured and the safe and early release of hostages. The attacks on leading hotels, hospitals and public transport in Mumbai, the business and financial capital of India, show that the terrorists are targeting an important sector of the Indian economy, with a view (to) destabilizing democracy in India.

"These unfortunate attacks bring into focus the urgent need for concerted action by all countries to eradicate the menace of terrorism, wherever it is, and whoever the leaders and manipulators of such violence may be. As a country that has suffered the most brutal terrorism for the past three decades, and is currently engaged in determined action to eradicate it from our midst, Sri Lanka stands with the government and people of India at this time of tragedy and remain firm in our commitment to jointly combat and eradicate terrorism in all its forms from our countries, as well as from the South Asian region."

Russian President Dmitry Medvedev said: "The monstrous crimes of terrorists in Mumbai arouse our wrath, indignation and unconditional condemnation. The inhuman terrorist attacks on hospitals, hotels and other public places aimed at killing peaceful civilians, taking and murdering hostages are crimes directed against the very basis of civilized society. Those guilty of them should be severely punished. We support resolute actions of the Indian government to cut short terrorist actions. I would like to pass my deepest condolences to relatives and friends of those killed and wish the swiftest possible recovery to those injured."

German Chancellor Angela Merkel sent a letter to the Indian prime minister. The chancellor's office also telephoned the Indian prime minister to pass on the Merkel's sympathies and to offer Germany's help. She wrote: "I was appalled to hear the shocking news about the terror attacks on your country. As well as the sad fate of the many dead I'm particularly moved by the terrible situation of those who've been taken hostage. The Federal Republic strongly condemns these criminal acts. I would like to express my deepest sympathy to you and the people of your country. In this difficult hour our thoughts are with the victims and their loved ones. I wish the injured from the bottom of my heart a quick recovery."

In a written statement, French President Nicolas Sarkozy said: "I strongly condemn the indiscriminate violence that hit your country through this series of ugly and odious terrorist acts. In this sad moment, I wish to give my sincerest condolences to the families of the innocent victims of these reprehensible attacks and express my sympathy and my wish to the injured for rapid recovery."

Israeli Foreign Minister Tzipi Livni said: "I condemn the terror attack that is still ongoing in Mumbai it is another painful testimony that terrorism is the main challenge that Israel and the International community are dealing with."

A spokesman for U.S. President George W. Bush said: "President Bush offers his condolences to the Indian people and the families of the innocent civilians killed and injured in the attacks in Mumbai, India. The United States condemns this terrorist attack and we will continue to stand with the people of India in this time of tragedy."

The Kuwaiti government "strongly condemned" the terrorist attacks in Mumbai.

Canadian Foreign Minister Lawrence Cannon said: "Canada strongly condemns the savage terrorist attacks in Mumbai, which have left hundreds of innocent civilians injured or killed. These cowardly attacks are truly appalling. On behalf of all Canadians, I extend my condolences to the families and friends of those who lost their lives, and I wish a speedy recovery to the injured. ... Canada stands firmly united with the government of India in condemning these despicable acts of violence. Canada and India share a commitment to freedom, democracy, human rights and the rule of law. Among our mutual priorities is close cooperation to promote international security and to fight terrorism."

The Singaporean government said: "Singapore strongly condemns the attacks. We would like to convey our deepest condolences to the victims, their families, the government of India and its people. The Mumbai attacks underscore the common terrorist threat that we continue to face today. Singapore stands firmly behind the Indian government in its fight against terrorism."