(CNN) -- Hemant Karkare, Mumbai's slain terror chief, was a shrewd and unflappable investigator whose death is a blow to a police force that has difficult work ahead, his colleagues said this week. 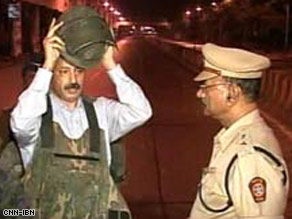 Hemant Karkare, left, was killed by gunmen in Mumbai shortly after this video was taken Wednesday.

According to accounts in Indian newspapers, Karkare, 54, was credited with solving many crimes and did his job apolitically and with the utmost integrity.

"The state Anti-Terrorism Squad has lost a daredevil officer in Hemant Karkare," Peter Lobo, chief inspector of the Anti-Terror Squad in Pune, told The Times of India on Thursday.

Karkare later got word the situation at Chhatrapati Shivaji Terminus was more serious. The terror chief and two other officers -- armed with automatic weapons -- jumped in a jeep and rushed to take on the terrorists, The Hindu reported.

Watch how victims are coping with the attack »

Footage from CNN's sister network, CNN-IBN, showed Karkare donning a helmet and putting a bulletproof vest over his light blue shirt as uniformed police officers with firearms and walkie-talkies surrounded him.

It would be the last video taken of Karkare before terrorists shot him three times in the chest near Cama hospital, the site of another Wednesday attack in Mumbai.

"Though a workaholic, he was a soft-spoken officer. ATS has received a severe blow because of the untimely death of Karkare," Lobo told The Times of India before departing Pune to pay his respects to Karkare.

Karkare joined the Indian Police Services in 1982. He became head of Maharashtra's Anti-Terror Squad in January after he returned from Austria, where he served seven years in the Research and Analysis Wing, India's external intelligence agency.

The post in Austria was testament to his acumen as a police officer, a colleague told The Times of India.

"Due to his excellent ability to handle things, he was posted to the Research and Analysis Wing in Austria. He was like family to me,'' said Bipin Gopalakrishna, who joined the force with Karkare in 1982.

According to CNN-IBN, Karkare was credited with solving bombing cases in Thane, Vashi and Panvel and played a key role in cracking the case of the September 29 blast in Malegaon, which reportedly killed six people. He also uncovered several radical Hindu groups operating in Maharashtra, according to media reports.

Karkare came under intense political pressure while investigating the Malegaon bombing, and it was widely reported that he warned officers in his command against succumbing to pressure to doctor evidence.

"We should do our job and it is for the court to decide," Karkare was quoted in several media outlets as saying.

"He was simply superb. He could handle any difficult situation boldly and with a cool mind," Aurangabad Police Commissioner Thakur Deepaksinh Gaur told The Times of India. Gaur told the paper he had worked with Karkare in Aurangabad and Nanded.

Added another Indian Police Services officer: "His death is a huge loss to our force and society."

When not on the clock, Karkare was known to enjoy sculpting and could often be found whittling driftwood, The Indian Express reported. He also enjoyed music and dabbled in palm reading, former diplomat T.P. Sreenivasan told The Hindu.

"We used to put him in one of the stalls as an Indian palmist during the annual charity fair organized by the Indian ambassador and he was big hit with the crowd," said Sreenivasan, who worked with Karkare in Vienna for five years.

Sreenivasan told The Hindu that Karkare -- who had strong credentials in fighting terrorism, corruption and money laundering -- could have earned a post at a U.N. agency in Vienna, but chose instead to return home to serve India.

Karkare is well-admired, Sreenivasan told The Hindu, and is survived by a doting family and many friends and admirers.

Contacted in Pune, Karkare's brother Shirish found it difficult to speak about his brother's death Thursday.

"He was a father figure for me," the younger brother told The Times of India.

Shirish's wife Amruta told the newspaper that the anti-terror chief would be laid to rest when his daughters arrived from overseas.

The older daughter Jui Navare lives in Boston, Massachusetts, she said, and the younger daughter studies at the London School of Economics. Karkare's son Akash is a student at R.A. Podor College of Commerce and Economics. His wife Kavita teaches at a college in Mumbai, she said.