(CNN) -- Scientists have identified new rifts on an Antarctic ice shelf that could lead to it breaking away from the Antarctic Peninsula, the European Space Agency said. 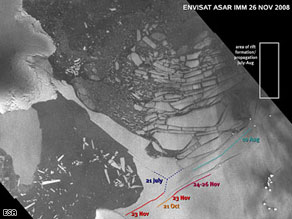 A satellite image of the Wilkins Ice Shelf, which could break away from the Antarctic Peninsula.

The Wilkins Ice Shelf, a large sheet of floating ice south of South America, is connected to two Antarctic islands by a strip of ice. That ice "bridge" has lost about 2,000 square kilometers (about 772 square miles) this year, the ESA said.

A satellite image captured November 26 shows new rifts on the ice shelf that make it dangerously close to breaking away from the strip of ice -- and the islands to which it's connected, the ESA said.

Scientists first spotted rifts in the ice shelf in late February, and they noticed further deterioration the following week. The period marks the end of the South Pole summer and is the time when such events are most likely, said Ted Scambos, a glaciologist at the National Snow and Ice Data Center at the University of Colorado in Boulder.

Before the new rifts were spotted this week, the last cracks were noticed July 21.

"These new rifts, which have joined previously existing rifts on the ice shelf, threaten to break up the chunk of ice located beneath the 21 July date, which would cause the bridge to lose its stabilization and collapse," said Angelika Humbert, a scientist from Germany's Muenster University who spotted the cracks with Matthias Braun of the University of Bonn.

Wilkins is the size of the state of Connecticut or about half the area of Scotland. It is the largest ice shelf on the Antarctic Peninsula yet to be threatened.

If the ice shelf breaks away from the peninsula, it will not cause a rise in sea level, because it is already floating, scientists say.

Scambos said the ice shelf is not on the path of the increasingly popular tourist ships that travel from South America to Antarctica. But some plants and animals may have to adapt to the collapse.

The ice shelf had been stable for most of the past century before it began retreating in the 1990s.