NEW: 37 aircraft have left Suvarnabhumi international airport for the base
NEW: There are some 100,000 stranded tourists awaiting flights
Almost 50 injured when possible grenade launched at protesters Sunday
Another blast hits road in front of smaller airport, Don Muang 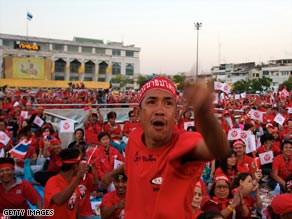 By early Monday, 37 aircraft had left Suvarnabhumi international airport, where hundreds of demonstrators have brought air traffic in the capital to a halt. All but one airplane, landed at the U-Tapao Royal Thai Navy Airfield about 140 km (90 miles) southeast of Bangkok, spokeswoman Monrudee Gettuphan said.

Authorities have estimated 100,000 passengers have been stranded since the protesters -- led by the People's Alliance for Democracy -- seized the airport on Tuesday, vowing not to withdraw until the government resigns.

The anti-government alliance also has taken over another smaller airport, which the government had been using as its temporary office after being shut out of its headquarters -- which the protesters have also seized.

At times, the protests have turned violent. A pair of explosions injured 49 people -- three of them seriously -- when what was believed to be a grenade was launched at protesters at the Thai government house, said Dr. Petchpong Kumjornkijjakarn, director of the Eruwan Rescue Center.

The government house has been under the control of the protesters for the past three months. Later, police said there was another blast on a road in front of Don Muang Airport, the smaller of two airports being occupied by protesters.

The alliance has vowed not to leave the buildings until the current government resigns.

Prime Minister Somchai Wongsawat declared a state of emergency at the two airports last week, but it is unclear what powers the declaration gives the government. The next day, he reassigned the police chief, dissatisfied with the latter's handling of the demonstrations.

About 60,000 tourists arrive at the international airport daily. Each day it remains closed, airport authorities lose about 50 million baht ($1.4 million) in income, according to the Thai News Agency.

Thailand's powerful army chief has urged Somchai to dissolve parliament and call fresh elections. He also asked the protesters to disperse. Both sides ignored his comments.

The army has said it will not stage a coup to end the crisis.

The anti-government alliance accuses the current administration -- led by the People Power Party (PPP) -- of being a proxy government for one-time Thai Prime Minister Thaksin Shinawatra. Thaksin was ousted in a bloodless coup in 2006, but he returned to Thailand after the PPP swept into power in December 2007.

Then, in August, he fled again just as he was to appear in a corruption case against him.

The anti-government protesters want Thaksin extradited and tried on those charges. It also accuses the PPP government of wanting to amend the constitution so Thaksin does not have to face charges.

The protesters have held almost-daily demonstrations since May. They seized government house in late August, fortifying it with sandbags, tires and shells of burned-out buses.

CNN's Dan Rivers and Kocha Olarn contributed to this report