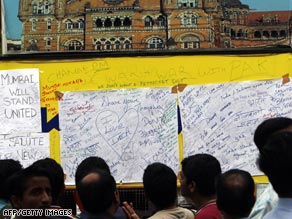 Onlookers in Mumbai read messages posted outside the Oberoi Hotel, scene of one of the attacks.

U.S. intelligence indicated that a group might enter the country by water and launch an attack on Mumbai, said the source, who refused to be identified due to the ongoing investigation into the attacks and the sensitivity of the information.

Indian security forces have confirmed to CNN that not only did U.S. officials warn them of a water-borne attack in Mumbai -- they were told twice. The area entered a higher state of alert for a week, including tightened security measures at hotels, but those efforts were eventually reduced, Indian officials said.

Local fisherman in Mumbai said they witnessed a group of gunmen dock their boat Wednesday night, before heading toward the busy causeway.

Also, sources have told CNN-IBN that officials found phones and a global navigational device on an abandoned boat floating off the coast of Mumbai. The boat had been hijacked, intelligence officials told CNN-IBN. Watch Nic Robertson's report about U.S. warning

Four crew members who had been on board were missing. The captain was found dead, lying face down with his hands bound behind his back.

India has made clear that it believes last week's coordinated attacks in Mumbai originated in Pakistan, but the Indian government is under pressure to explain the lapse of security that allowed the siege to occur.

Indian police say 179 people were killed in the attacks on 10 targets in Mumbai. Most of the deaths occurred at the city's top two hotels, the Oberoi and the Taj Mahal. Watch report about nanny saving infant

Pakistani authorities say Islamabad has not received any evidence that militants from within its borders carried out the attacks, but have vowed to fully cooperate in the investigation. Suspicion has fallen on Lashkar-e-Tayyiba, a Pakistan-based terror group allied with al Qaeda, even though it has denied responsibility.

Watch how attacks could damage relations »

Pakistan banned the group in 2002 after an attack on India's parliament that brought the two countries to the brink of war.

Indian security forces say they arrested a member of the group in February, noting that the man was casing Mumbai for an attack.

U.S. counterterrorism officials continue to say signs are pointing to Lashkar-e-Tayyiba and they haven't seen anything to rule it out. However, they will not definitively say the group is responsible.

A team of FBI agents is in Mumbai to assist in the investigation, and U.S. Secretary of State Condoleezza Rice is heading to New Delhi on Wednesday to try to ease strained relations between the nuclear neighbors.

At the center of India's investigation is the lone suspect in police custody, who Indian authorities say is Pakistani and trained by Lashkar-e-Tayyiba.

Indian officials have identified the suspect as a clean-shaven young man who was photographed during the attack on Mumbai's Victoria Terminus train station. One of the still images shows him walking with one arm outstretched and a gun in his other hand, lowered by his side. He is wearing a black T-shirt, cargo pants and a backpack.

Watch Anderson Cooper talk with Fareed Zakaria about the attacks »

Indian police say the other nine attackers were killed in three days of battles with police and the Indian military.