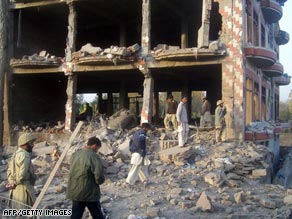 The suicide bombing took place in the town of Mingora in the Swat Valley. The motorist detonated explosives when police tried to stop him from crossing a security checkpoint, said police officer Dilawar Khan.

The blast also wounded 50 others, including 10 who were in critical condition, Khan said.

In the second attack, militants fired rockets at a supply terminal in Peshawar that sits along a route from Pakistan to Afghanistan. The attack left two people dead, two others wounded and 12 trucks ablaze, Peshawar police spokesman Mohammad Rasool said.

Because Afghanistan is landlocked, many supplies for NATO-led troops fighting Islamic militants there have to be trucked in from Pakistan -- and the swath of tribal areas in northwest Pakistan has become a haven for militants who mount regular attacks in both countries, U.S. officials have said.

Pakistan's central government has long exerted little control in the area, but it launched an intense military offensive in late July to flush out militants. As retaliation for the military presence, the Taliban has carried out a series of deadly bombings -- and said the attacks will continue until the troops pull out.

Convoys carrying food and military supplies to U.S. troops in Afghanistan have regularly come under attack.

The Swat Valley, where the suicide bombing occurred, was once Pakistan's biggest tourist destination.

But in recent months, militants bent on imposing fundamentalist Islamic law have unleashed a wave of violence across the North West Frontier Province, where Swat is located, that has claimed hundreds of lives, many of them security personnel.