(CNN) -- How much space do we need to live happily? 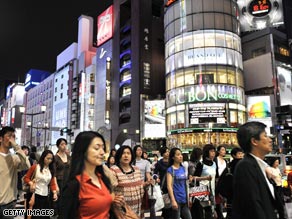 Tokyo is a very dense city but manages to have plenty of open spaces.

As rates of urbanization increase, especially in Africa and Asia, close attention is being paid to how and where we live in urban environments.

CNN talks to Jonathan D. Solomon, Assistant Professor of Architecture at Hong Kong University about a concept known as "urban densification" which suggests the most socially and environmentally sustainable way to build homes today is to make them more compact and closer together, but can also serve to preserve communities and public spaces.

CNN: Why should we live more densely?

Jonathan D. Solomon: Dense cities use less energy per person than more dispersed suburban equivalents. When you consider a city in relation to its larger region, the ecological footprint per person in a city may be significantly smaller than rural inhabitation.

This fact pushes the city to the forefront of environmental sustainability and makes the question of density a critical one for the 21st century.

CNN: How does packing us in tightly make for environmental sustainability?

Jonathan D. Solomon: It works in two ways. One way is the obvious scale issue. Smaller spaces take less energy to heat and to cool and use fewer resources to fit out. So by and large, the smaller the space, the smaller the waste.

Secondly, bringing resources to human habitation as well as infrastructure all take a tremendous amount of energy. The cost to construct and coordinate supply chains can be made more vastly efficient when people live in dense communities.

Jonathan D. Solomon: Not necessarily. Tokyo is one of the densest cities on earth but not very high rise. New Jersey is the densest state in the U.S. and it is entirely suburban. Dense doesn't mean higher, it means being better organized.

When you fill in vacant lots around the city with low rise buildings, you increase density and also link broken communities together. In doing so you increase both environmental and social sustainability. We have the ability to build all these different structures.

Jonathan D. Solomon: When it comes to private space, densification means reducing that, but it also means finding better ways to increase shared space. In short, the answer lies in taking a broader and more comprehensive look at planning in cities.

CNN: Why is it more important to have more shared space rather than more private space?

Jonathan D. Solomon: It creates the fundamental sense of community when you mix different types of people in one place.

In a city like Mumbai you see enclave developments where the rich wall off parts of the city for dense new developments. There is a privatization of the roads and water delivery so you get that densification but no relation to the city around it.

Hong Kong is also a city which is densely developed but where the notion of public space is not present. There is limited mixing ground for people from different economic and cultural backgrounds to share space.

CNN: Where are examples of dense communities that are working in the world?

Jonathan D. Solomon: Tokyo is a very dense city but there is a lot of open space. New enclave developments are scrapping low-rise traditional neighborhoods and building blocks of high rises set in semi-private urban parks.

Unlike similar developments elsewhere, projects like Midtown Tokyo or Roppongi Hills take advantage of private investment to invest back into social space and infrastructure to connect the enclave to the city. The result is a shift in public-private relationships and spatial relationships in the city. But it doesn't affect the strong social sphere which has been there for some time.

CNN: All this takes a lot of investment. Densification may help rich communities, but what about poor ones?

This is a major issue in China because of all the people moving into cities there. It's the lack of public investment in that sector of human inhabitation in slums of the world that prevents them from rising up.