In her own words, nanny's brave escape in Mumbai

JERUSALEM (CNN) -- The world knows her as the daring nanny who, clutching a 2-year-old boy, pushed past the havoc in a terrorized Mumbai and risked her life to keep the toddler safe. 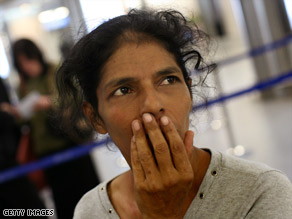 Sandra Samuel bravely saved the life of Moshe Holtzberg, 2, but says she sees no heroism in her actions.

But Sandra Samuel sees no heroism in her actions amid last week's terror attacks on India's financial capital that killed nearly 180 people -- including baby Moshe's parents, Rabbi Gavriel Holtzberg and his wife, Rivka. She only wishes she could have done more.

"Even today, I am thinking I should have sent the baby and done something for the rabbi and his wife," Samuel told CNN in an exclusive television interview in Israel, where she now lives.

Samuel and Moshe were among the few to make it out of the Chabad House alive after gunmen stormed the Jewish center, killing the Holtzbergs and four others.

Israel's Chabad movement has set up a fund to provide for Moshe's care. He is being looked after by members of the community, although who will serve as his guardian has not yet been established.

The nanny says she came face to face with a gunman late Wednesday, the first night of the siege. "I saw one man was shooting at me -- he shot at me."

She slammed a door and hid in a first-floor storage room and attempted to reach the rabbi and the others on the second floor.

Samuel says she emerged early the next afternoon, when she heard Moshe calling for her. She found the child crying as he stood between his parents, who she says appeared unconscious but still alive.

Based on the marks on Moshe's back, she believes he was struck so hard by a gunman that he fell unconscious at some point as well.

"First thing is that a baby is very important for me and this baby is something very precious to me and that's what made me just not think anything -- just pick up the baby and run," Samuel said.

"When I hear gunshot, it's not one or 20. It's like a hundred gunshots," she added. "Even I'm a mother of two children so I just pick up the baby and run. Does anyone think of dying at the moment when there's a small, precious baby?"

Outside, chaos flooded the streets as people tried to make sense of the massacre that killed at least 179 people and wounded 300 others. Ultimately, she and Moshe reached safety at the home of an Israeli consul before arriving in Israel, where she is considered a hero.

In the aftermath of the attacks, Moshe asked for his mother continuously, Samuel says, and he is learning to play again -- though he likes the nanny close by. And while she still has nightmares of the horrific siege that took hold of Mumbai, Samuel, a non-Jew and native of India, said she will stay in Israel for as long as Moshe needs her.

Watch as Samuel describes boy asking for his mother »

All About India • Terrorism • Israel