(CNN) -- An ancient race that lived 2,700 years ago in the Gobi Desert may have been among the first to use cannabis for medical or religious purposes. 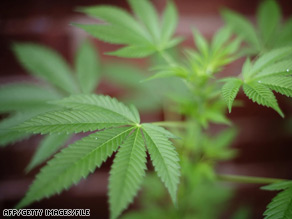 Researchers believe an ancient Gushi shaman may have consumed or burned pot for medical or religious purposes.

Nearly two pounds of the plant was found stashed in the tomb of a Gushi shaman. It was high in the chemical compounds that provide its psychoactive properties.

The Gushi people were a Caucasian race with light hair and blue eyes who likely migrated thousands of years ago from the steppes of Russia to what is now China. A nomadic people, they were accomplished horsemen and archers.

Chinese archaeologists excavating a network of 2,500 tombs near the town of Turpan in the Xinjiang-Uighur Autonomous Region unearthed the shaman's grave, which contained the cannabis, along with a trove of artifacts such as bridles, archery equipment and a rare harp.

The shaman is thought to have been about 45 years old when he died. Many of the bodies recovered in the area were found in an incredibly well-preserved, almost mummified condition. The shaman, however, was a skeleton.

"The deceased was laid out on the bottom of this tomb on a little bier," Russo said. "This individual seemed to be very high status because of the variety and quality of the grave goods, including the equestrian equipment, the archery equipment and the large amount of cannabis."

Russo said no pipe for smoking the cannabis was found in the shaman's tomb. Researchers think he might have eaten the cannabis or possibly put it on a burning fire to create fumes.

They don't think it was used to make hemp clothing or rope, as some other early cultures did. Genetic analysis of the plant suggests it was cultivated rather than gathered from the wild.

This find is not the first or the oldest example of ancient people using cannabis, but it may be the best studied.

"There may have been older finds of cannabis, but not with this level of scientific investigation attached to them," Russo said.