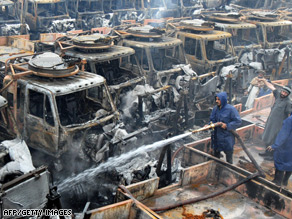 It was the fifth attack on NATO supply lines through Pakistan since November.

One of those attacks took place November 11, when as many as 200 Taliban fighters hijacked a convoy carrying NATO supplies from Karachi to Afghanistan via the border at Peshawar. The militants took two Humvees and paraded them in front of the media as trophies.

Also known as Yahya Hijrat, Kamal is an Afghan from Ningrahar province and a close friend of Baitullah Mehsud, leader of Pakistan's Taliban. In September, sources said Mehsud had died, but it remains unclear whether that's true.

Also late Thursday, suspected U.S. missiles struck a village in Pakistan's tribal region near the border with Afghanistan, according to Pakistani intelligence sources and local residents.

The missiles hit a house in the village of Kazah in South Waziristan, killing six people and wounding three, the sources and residents said.

Intelligence sources said the house was rented to local militants and used as a suspected militant compound.

The U.S. military in Afghanistan routinely offers no comment on reported cross border strikes, which are normally launched from unmanned drones. The United States is the only country operating in the region known have the capability to launch missiles from drones, which are controlled remotely.