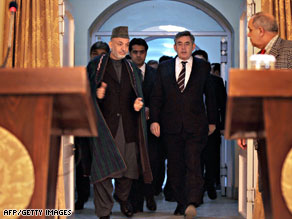 The Canadians were killed at 9 a.m.Saturday (11:30 p.m. Friday ET) when an improvised explosive device blew up near their armored vehicle during a patrol in Arghandab District in central Kandahar Province, the Canadian Defense Ministry said.

Another Canadian soldier was wounded in the attack.

The British marines were killed in two separate explosions in the southern Afghan province of Helmand.

British Prime Minister Gordon Brown said the Taliban used a 13-year-old boy to carry out the second attack -- a claim denied by the Taliban.

"For the Taliban to engage in such cowardly behavior -- that means that a 13-year-old young boy is used to kill British troops -- is something that will offend public opinion, not just in Afghanistan and Britain but right across the world," said Brown, who arrived Saturday in Afghanistan on an unannounced visit.

The British Ministry of Defense said one marine, who was taking part in a routine patrol, died en route to a military hospital from wounds suffered in an explosion Friday in the Sangin area of eastern Helmand province.

The other three marines were killed Friday in a separate explosion as they were conducting a "routine operation against enemy forces," the ministry said.

Brown declared his "repugnance at the way a young child was used for a suicide bombing that eventually led to the deaths of three brave, courageous soldiers."

A Taliban spokesman, Qari Yousef, denied the group had used a child in that or any other attack. He said the Taliban have enough fighters prepared to sacrifice their lives.

He also gave a differing account of the explosions.

In the other attack, in Sangin, Yousef said the Taliban killed five British soldiers at a bazaar with an improvised bomb.

During his unannounced trip, Brown shook hands with troops at Camp Bastion in Helmand, telling them to "keep up the good work" and thanking them "for everything you're doing."