Report: Afghan police should focus on crime, not militants

(CNN) -- Efforts to reform the Afghan National Police force have been stymied by "corruption and lack of political will," and police are wrongly being used to help fight the insurgency instead of crime, an independent research group said in a report. 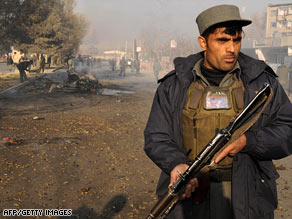 An Afghan policeman guards the scene of a suicide attack in Kabul on November 27.

"The U.S. military ... still mainly sees the police as an auxiliary security force rather than an enforcer of the law," the International Crisis Group concluded in a report posted Thursday on its Web site.

"Too much emphasis is still placed on using the police to fight the insurgency rather than crime.

"The Afghan National Police (ANP) is ill-equipped for this role, and has been targeted by the Taliban, with 1,200 killed in 2007 and a similar toll expected in 2008," the group added.

The Taliban will be on the agenda during the first visit by Pakistan's president to Afghanistan on Friday. The talks come amid ongoing warfare and tension along the Afghan-Pakistan border.

"The goal of the Afghan government and the international community should be a national police force able to uphold the rule of law, and thereby help tackle the root causes of alienation that drive the insurgency," the International Crisis Group said.

The group described Afghanistan's Interior Ministry as a "hub of systemic corruption," and accuses the department of placing "personal enrichment" above the need for improved policing.

Recent leadership changes at the Interior Ministry should be used to stress that abuses will no longer be tolerated.

"There has been little political will in Kabul or foreign capitals to tackle the power brokers who are preventing reform," said Samina Ahmed, the group's South Asia project director.

"Organized crime and lawlessness lie at the heart of much popular disillusionment and instability. Better law enforcement, including a functioning judicial system, would help counter any appeal the insurgents may hold in Afghanistan," he added.

All About Afghanistan • The Taliban • Pakistan • Terrorism