(CNN) -- Tokyo stocks opened only slightly lower Friday after a down day on Wall Street, buoyed by the possibility of an interest rate cut by the Bank of Japan. 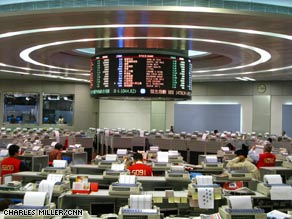 The Japanese government said Friday it expected a shrunken economy when the fiscal year ends in March. But investors on the Nikkei index, concerned with the growing recession, held out hope for the interest rate drop and held the index to a .16 percent fall.

Elsewhere, stocks were mixed, but with little movement. Australia's All Ordinaries index fell .41 percent and the Shanghai composite index was down .39 percent. But Seoul's KOSPI index was up .56 percent and Hong Kong's Hang Seng index rose .24 percent.

On Wall Street Thursday, a selloff accelerated in the last hour of a volatile session as traders squared up positions for a handful of options expiring Friday, known as "quadruple witching."

A torrent of bad news that had been ignored in the previous session came back to haunt the markets in the afternoon session. "We have had a market that has really, up until yesterday, been pretty resilient in the face of negative news," said Art Hogan, chief market analyst at Jefferies & Co. "The market has been ignoring a lot of bad news and it is not ignoring it today."

The dollar gained against other major currencies, with the yen just off the 13-year high it reached against the dollar Wednesday. Meanwhile, the 15-nation euro and the British pound both lost against the greenback.