Military: Up to 30,000 new troops to be sent to Afghanistan

KABUL, Afghanistan (CNN) -- Up to 30,000 additional U.S. troops could be sent to Afghanistan next year, military officials said Saturday. 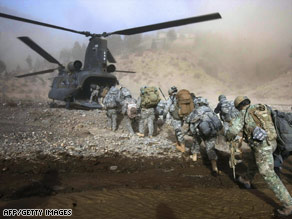 Of the additional troops, 20,000 will comprise four ground/maneuvering brigades, said Col. Gregory Julian, spokesman for U.S. forces in Afghanistan. That number is consistent with what Gen. David McKiernan, the U.S. commander in Afghanistan, called for in October, he said.

McKiernan requested the additional 20,000 troops be sent to fight the increasing violence by the resurgent Taliban forces in the southern and eastern parts of the country.

On Friday, military officials said Defense Secretary Robert Gates signed a deployment order to move an additional 3,000 troops to Afghanistan next year. Those troops will be part of a combat aviation brigade, the latest approved by Gates for the expected buildup of U.S. troops in the country in 2009.

The brigade will send a number of much-needed helicopters to the region. Helicopters are the main mode of transportation for the U.S. military in Afghanistan, where high mountain roads and passes make it difficult for large transport vehicles to move troops and supplies.

The additional troops would nearly double the level of U.S. troops in Afghanistan.

Troop levels are likely to be maintained at this increased level for three to four years, Julian said Saturday, as U.S. forces continue to try to "clear and hold" more parts of Afghanistan from insurgents and militants and train Afghan military and police to be self-sufficient.