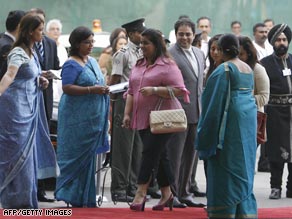 Guests arrive at the reopening of the Taj Mahal Palace hotel in Mumbai.

Asked about the statement, Pakistan's foreign ministry said the government in Islamabad "has so far not received any information or evidence relating to the Mumbai incident from the government of India."

According to India's foreign ministry, Kasab, 21, stated in his letter that he and the other attackers were from Pakistan and asked for a meeting with Pakistan's High Commission.

Indian authorities said Kasab had admitted he was one of 10 gunmen who attacked several targets in Mumbai on November 26, sparking three days of battles with police and Indian troops in the heart of the city that is the hub of India's financial and entertainment industries.

India said Kasab told investigators he and the others were trained for more than a year in Pakistan by Lashkar-e-Tayyiba, a banned Islamic militant group.

The attacks left more than 160 people dead, as well as nine of the gunmen.

Most of the deaths occurred at the Taj Mahal Palace and the Oberoi-Trident hotels, which reopened on Sunday -- three weeks after the attacks.

CNN's Sara Sidner in New Delhi and Zein Basravi in Islamabad contributed to this report.