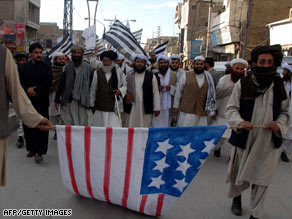 Three missiles reportedly targeted vehicles mounted with anti-aircraft guns, according to the sources. One missile missed its intended target and landed near a house.

Another local official said nine other militants were wounded in the attack.

The missile strikes took place Monday morning about nine miles (15 km) from the town of Wana in South Waziristan.

The U.S. military in Afghanistan routinely offers no comment on reported cross-border strikes, which are normally launched from unmanned drones.

But the United States is the only country operating in the region known have the capability to launch missiles from drones, which are controlled remotely.

All About Pakistan • United States • Afghanistan • The Taliban