KABUL, Afghanistan (CNN) -- A suicide car bomb blast near a voter registration site killed 16 people, 14 of them children, and wounded 58 in southeastern Afghanistan on Sunday morning, according to a senior police official and the U.S. military. 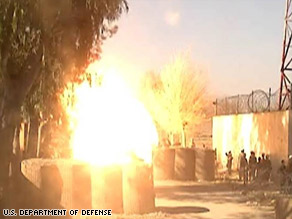 The U.S. military released this photo of the blast near a voter registration site.

A Taliban spokesman said one of his group's fighters carried out the attack.

When security guards stopped the car at the entrance to the Mandozai district headquarters, the driver detonated the explosives inside the car, Khost provincial security chief Mohammad Yaqoub said.

A security guard and an Afghan National Army soldier were among the dead. There were no military casualties, said U.S. Col. Gregory Julian. Coalition and Afghan forces worked together to evacuate the wounded to military and civilian hospitals, he said.

The military released photos of the incident, saying they "provide further proof the Afghan militants are not interested in the welfare nor benefit of the Afghan people."

Dozens of tribal elders were meeting nearby in the district administrative office at the time of the bombing, the police official said. The Mandozai district is in the Khost province.

Zabiullah Mujahid, a Taliban spokesman speaking by phone from an undisclosed location, said the suicide bombing was carried out by Qari Hameedullah, a Taliban fighter.

The girls died when one of two rockets fired on Kabul crashed into a house in the southern part of the city. In the statement, Karzai called those who fired the rockets "enemies of Afghanistan" who "can't achieve anything by firing rockets but the killing of innocent civilians."

The president called the suicide bombing an "un-Islamic act" and said those behind it "are not aware of the Islamic teachings which outlaw the killing of innocent people. Those who ordered and executed this attack cannot escape the revenge of Afghans and God's punishment."