From greed to green: Investing in the future

BATH, England (CNN) -- Green isn't usually thought of as being good for business, and industry is rarely linked to a healthy environment. 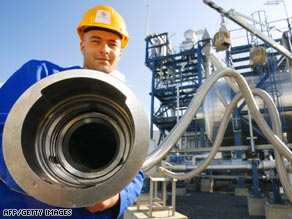 Want to invest in one of these? A worker displays a carbon capture pipe at a German power station.

But a complex mix of push and pull factors are making environmental business practices increasingly attractive to investors and with that, some say, providing fresh hope for a planet in trouble.

Not only are the emerging markets for alternative power booming -- and corporate efficiency initiatives looking more attractive -- as fossil fuel prices rise, but many companies are also increasingly aware that there are real costs associated with doing nothing.

The Stern Review on the Economics of Climate Change argued in 2006 that we faced losing a fifth of the world's wealth through unmitigated climate change unless we act.

"With the financial crisis upon us this is a time to consider new investment opportunities. There is an unfreezing of opportunities that just wasn't there before; goodness knows it's important. The green investment decisions we make now will shape a future that, if we don't solve these problems, the current financial crisis will seem like a local sideshow," she told CNN.

Real money to be made?

But apart from buying shares in wind turbines and solar panel manufacturers, what are the emerging investment opportunities? And is there real money to be made?

Professor Stuart Hazeldene, professor of geology at the University of Edinburgh, thinks so. "However many green renewals we build it's inevitable that fossil fuels will continue to provide most of the world's energy until 2050," he told audiences at a recent debate organized by the environmental NGO, Earthwatch.

"All of this energy involves combustion and releasing carbon... We have to decrease these emissions for sustainability in the future. That's what carbon capture and storage allows you to do."

"It is a very big business opportunity," he says.

By bringing carbon-capture technology to power stations and other major polluters, Hazeldene believes we could reduce emissions dramatically while limiting the number of "decisions" needed to move ahead.

Carbon capture works by removing carbon chemically and turning it into a liquid, which is then piped away for safe storage.

"Carbon capture and storage is legal, possible and we can build the technology now," he says. "It can also be profitable if the carbon price is high enough. The first plant won't be the most efficient, but then the first airplane wasn't a jet. We need to start now to get on the road to technological improvement.

"You won't get your money back in five years; it is a much more long-term strategic decision. But the biggest risk is not investing in CCS, it's not investing in the technology. . .if we don't, and we continue with business as usual, then we're not just looking at a high tide in Greenwich [England], we're talking about Venus."

Realizing the value of ecosystems

Another investment opportunity that advocates argue can help save the planet while keeping one eye on the bottom line is the nascent market for monetizing the landscape itself. As companies increasingly realize the value of the ecosystems they use, they are willing to pay for them to be protected.

"Ecosystem services are the services we as a society need to survive: fisheries, timber, agriculture," says Annelisa Grigg, director of environmental markets at Fauna and Flora International, who work with companies including Rio Tinto and British American Tobacco to minimize their impact on their environment.

She cites the UN Millennium Ecosystem Assessment, which found that 60 percent of ecosystems are degraded or in decline, as evidence of how urgent the situation is.

"This decline in ecosystem services is leading to a compelling business case for companies to understand their dependence on these services and minimize their impact," says Grigg. "The problem is at the moment the costs are felt by society, not by an individual company or investor. But this is changing."

Already companies are investing in ecosystems, either as carbon offsets or because their productivity depends on them.

French mineral water company Vittel pays farmers on the land above its aquifers to use fewer chemicals. In the U.S. the legislative environment has encouraged "wetland banking" where companies that develop on wetlands must compensate for that development.

Investment firm Merrill Lynch has signed a deal with the governor of Aceh, Indonesia, to preserve 750,000 hectares of rainforest, principally as a carbon offset.

"The reality is at the moment that the most widely understood market is in water and carbon," says Grigg. But she believes that as we grow to understand our financial dependence on a healthy natural environment, markets will develop in many other areas.

However, some activists argue that monetizing the environment creates a change of mentality in local communities that is not good for them or the environment.

"They pay peasants to be 'service providers' and it changes their view of the land around them," says lawyer-activist Camila Moreno, who campaigns on behalf of environmental and social causes in Brazil. "Then when the money doesn't come for some reason they say, 'You haven't paid, so we'll destroy the forest.' It upsets the balance that has existed for hundreds of years."

Friends of the Earth International also fears that UN plans to slow deforestation by making rich countries pay to protect rainforests are open to abuse by corrupt leaders or illegal loggers.

Chopping down trees for crops

One of the main causes of deforestation is agriculture. And one of the major challenges facing the planet is feeding a growing population without sacrificing more wilderness ecosystems to the plow.

Vivian Moses, visiting professor of biology at University College of London, believes that genetically modified foods are the only way for humanity to keep feeding itself without turning the globe's remaining wild places into farmland.

"Agriculture depends on technology and has done since the beginning," he says. "In the next 50 years or so we need to double our agricultural output, partly because of the growing size of the population and partly because of growing wealth.

"There is not much more land that we can or should devote to agriculture. If you add to that the growing population will build houses and factories, taking up more land. . .we have to increase productivity."