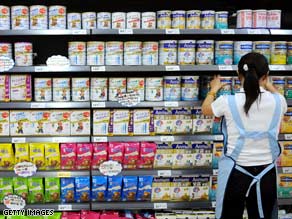 Tian Wenhua, Sanlu's former board chairwoman and general manager, and three other executives are on trial for producing and selling fake or substandard products, according to Xinhua news agency.

Wenhua, 66, pleaded guilty on the first day of the trial at a court in Shijiazhuang, the capital of northern Hebei Province, Xinhua reported. She told the court that she first received tainted milk complaints from consumers in mid-May -- four months before the issue became widely known -- according to the report.

Prior to the four Sanlu executives, at least eight people stood trial over charges of producing, adding melamine-laced "protein powder" to milk or selling the tainted milk to Sanlu or other dairies.

"The enterprises offered to shoulder the compensation liability," the country's Dairy Industry Association said Saturday, according to Xinhua. "By doing so, they hope to earn understanding and forgiveness of the families of the sickened children."

The group said victims will receive a one-off cash payment, but did not provide the amounts, according to Xinhua.

"The money for compensation is in place now and will soon be handed to the people who have custody of the sickened children through various channels," the association said.