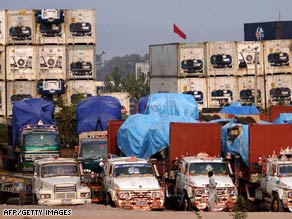 Containers bearing supplies for US-led forces and NATO in Afghanistan wait in Pakistan in November.

Eight people -- two suspected Taliban militants and six civilians -- died in the operation in the Khyber Agency that involved military helicopter gunships, according to Pakistani intelligence sources. The fighting was taking place near the town of Jamrud.

The Khyber Pass, a key transit link for NATO and U.S. military supplies from Pakistan to Afghanistan, has been closed as a result of the operation, said Tariq Hayat, Khyber's political agent. He did not know when it would reopen.

"We are pleased with the operation to clear out insurgent in the areas adjacent to the pass so our supplies can go unhindered. This temporary delay will result in the long-term gains for all that use that passage route. There is no immediate impact in our ability to provide supplies to the troops."

The Kyber Pass -- an ancient, three-mile pass which links Pakistan to Afghanistan through the Hindu Kush range -- has traditionally been a vital route for supplies into Afghanistan.

NATO countries are working on plans with countries in the north -- Azerbaijan, Turkmenistan and Uzbekistan -- for possible new supply routes.

Earlier this month, militants fired rockets at a supply terminal in Peshawar that sits along the route. The attack left two people dead, two others wounded and 12 trucks ablaze.