(CNN) -- In an age of unromance, of Internet dating, of gut reaction cynicism -- I love hearing a story about how Lenny Ann Low of Sydney met her fiancé Alan of Glasgow. 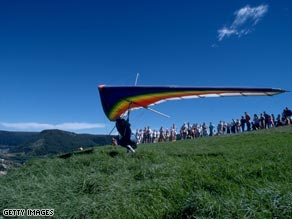 "Tell the story again!" I would beg her in the manner of a child wanting to be read her favorite fairytale, never tiring of the narrative, always smiling with delight at the ending.

Lenny met Alan when she was in Edinburgh at the annual comedy festival. She was lining up for a hot tuna melt and a latte at a station café with 9 minutes to catch a train back to London.

She stood at the back of the long queue thinking, probably, of anything but love -- when she locked eyes with the young man behind the steaming coffee machine -- the man who in a few short minutes would be making her latte, than in an even shorter minute later would be consigned to the distant memories of coffee makers past.

But when their eyes locked from over the Gaggia machine down the snaking queue, Lenny felt an unmistakable current. Could this be love? And if so -- what could be done in the nine minutes she had left in the country?

Lenny knew exactly what to do as she had formulated a plan that she had been following for some years. Called Future Friday it was a game she played with herself each week.

In order to gain more confidence and "get out of a rut" she decided that by Friday each week she would do something scary that would in some way alter her future.

Minutes ticked up. She moved up the queue. She ordered her tuna melt. She took her coffee and sat in the train.

Six minutes until it pulled out bound for London. She thought of Future Friday. She wrote her email address on a piece of paper, leapt off the train, raced back to the café, barged through the queue and gave Alan her address.

"Email me!" she told the stranger as she thrust the paper in his hand and bounded back to catch her train.

He did email when she was on a plane halfway to Australia. They emailed for a while, then eventually he came out to Sydney. They got on with the business of falling in love and next month they will marry.

Unlike other pundits with a self-help plan, Lenny's not promising hers will deliver riches, fame or love.

What she does say however is that if you follow it, you will have a lot of adventures and take all sorts of risks that will enrich your life in many ways.

Lenny explains how it works: "Future Friday is so simple it's embarrassing. By Friday at the end of every week you must do something that is good for your future that is a risk or something scary." For Lenny, "it could be something like getting pap smear, making a dental appointment or telling someone that you fancy them or ring someone out of the blue and asking them if they've got a job. I've done all those things."

Feeling like she was stagnating inspired Lenny to develop the scheme. "Being in a bit of a dead-end job made me want to do this - I thought I needed a trigger. It also lets you off the hook -- you can say I've done my Future Friday now -- I don't have to do anything else for the rest of the week."

Lenny isolated particular areas of her life that she had neglected. "I put off making a dental appointment for five or six years. I put off telling men they were nice. I put off my pap smear all my life."

The list of things to do each week for Future Friday then became "a combination of exciting thrills and horrible must dos."

Lenny made sure she told all her friends about Future Friday so she could get extra support during the difficult weeks.

"You'd get praise. I'd tell various people about it. You'd move enormous blocks. I really was quite down and just the little sense of doing stuff helped enormously."

Lenny started doing Future Friday in 1996 to boost her confidence and expand her world, but she had no idea how it would change her world.

She was also contacted by a number of people "friends of friends, strangers" who had heard about Future Friday and started practicing it themselves.

She recommends starting your own Future Friday if you are also "swimming around and drowning in a lot of stuff.

"It's a good way to anchor yourself. Now I have formed a habit of getting on with things now -- today I had to get the celebrant form done and I just did it." Every time you tick off a Future Friday item Lenny says to give yourself a pat on the back.

"It's about the power of affirmation and realizing you're not a failure -- and its small and it doesn't cost anything. You can take delightful risks."

• Pick a couple of basic but difficult issues in your life -- a niggle. Make the appointment or ring about a job and you are on your way.

• Go and see that man at the pub who you thought was cute. Don't be shy. "I told a number of men I liked them and they didn't always feel the same way, but at least I didn't die wondering."

• Tell other people and they can get inspired and also support you in your Future Friday. E-mail to a friend