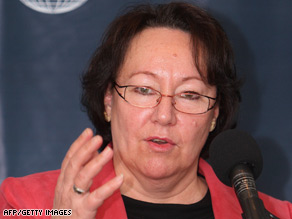 She was nominated for the Nobel Peace Prize in 2007 and describes her mission as "putting a human face" on the devastating effects of climate change on ordinary people and communities.

In the early 1990s, Watt-Cloutier was a community leader in Nunavik -- the northerly area of Quebec.

By 1995, she had been elected President of the Canadian branch (one of four) of the Inuit Circumpolar Council (ICC), which represents the Inuit populations of Russia, Greenland, Alaska and Canada.