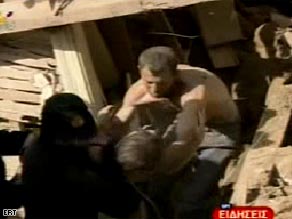 Rescuers remove a victim from a collapsed building after an earthquake struck Greece Sunday.

Another 37 were hurt as a result of the quake, many as they tried to flee their homes, Greek Interior Minister Prokopis Pavlopoulos said at a news conference in Athens.

The temblor struck around 3:30 p.m. [8:30 a.m. ET] and measured 6.1 in magnitude, according to the U.S. Geological Survey. Athens' Geodynamic Institute registered the quake at 6.5 on the Richter scale -- which is no longer used by the USGS.

Its epicenter was located about 20 miles [32 kilometers] southwest of the Greek port city of Patras.

Pavlopoulos immediately dispatched a rescue and recovery team, which includes members of five government agencies, to assess the damage and needs in the quake-stricken Peloponnese region.

So far, most of those reported trapped have been removed -- including a 43-year-old villager who died after his house collapsed on him, the interior minister said. The other victim died of a heart attack while being rushed to the hospital, he said.

"This is a very serious quake, but there will be no evacuations," Pavlopoulos said. iReport.com: Are you there? Send pictures, video

Video showed rescuers pulling an injured man from a collapsed building, quickly outfitting him with a respirator mask and loading him onto a stretcher.

Watch rescuers pull out a survivor from rubble »

It was "no surprise" that a strong quake hit in the area, where earthquakes are common, according to Geodynamic Institute director Gerasimos Papadopoulos.

People in Athens -- about 80 miles [129 kilometers] east of the epicenter-- felt the ground shake for as long as 20 seconds.

Due to its fault lines, Greece is one of the most quake-prone countries in the European Union. A quake and aftershock both measuring over 6.4 in magnitude struck near Kalamata off the southern coast of the Peloponnese peninsula in mid-February, causing no major damage or injuries.

The last major earthquake in Greece was in 1999 and left about 100 people dead.