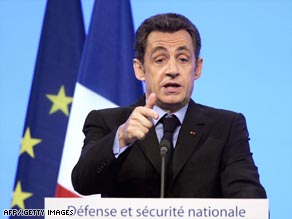 France was a founding member of the alliance in 1949 but it left the military structure in 1966 amid frictions with the United States. France has continued, however, to contribute troops to NATO missions and to participate in NATO's political bodies.

Analysts expect that when France takes over the rotating six-month presidency of the European Union next month, Sarkozy will try to boost the EU defense dimension. Some nations, particularly the United States, have been suspicious of a greater EU defense initiative, seeing it as an attempt to undermine NATO.

Sarkozy's move, which he has signaled for months, could be seen as an attempt to reconcile the two sides and help the United States warm to the idea of the European Union having its own security organization.

"Basically, the tradeoff is that they no longer suspect French motives in pushing for a greater EU defense dimension because of Sarkozy's willingness to make France a fully participating member of NATO," said Robin Oakley, CNN's European Political Editor.

From its earliest years, NATO's transatlantic ties were strained because U.S. analysts warned that if the European allies failed to increase their contributions to the alliance, they risked losing the support of the United States, according to NATO.

The European allies felt the United States was trying to dominate NATO, and the resulting frictions led French President Charles de Gaulle to withdraw from NATO's military structure in 1966, according to NATO.

That decision meant no French forces could be under permanent allied command and that France would have no participation in defense planning.

While France was still not a part of the military command, it contributed troops and funding to NATO activities, including KFOR in Kosovo and ISAF in Afghanistan. Some 5,000 French troops are currently committed to NATO operations and France contributes 13.8 percent of its military budget to the alliance, according to the French Foreign Ministry.

"Sarkozy has broken a long-standing taboo in French foreign policy and opened the possibility of a dramatic improvement in EU-NATO cooperation," the CER said in December, after the president hinted at the move he made Tuesday.

The European security and defense policy, or ESDP, has its origins in the 1990s, when EU leaders decided Europe needed its own military and civilian capabilities for security. So far, the ESDP is still just a framing of common defense policy which might one day lead to a common defense, according to the European Union.

The ESDP does not involve the creation of a European army, the EU says.