(CNN) -- Prince Harry paraded alongside his fellow British servicemen in Scotland Wednesday, as he attended a memorial to service members who have died in Afghanistan. 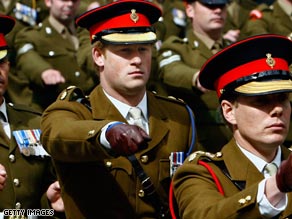 Prince Harry takes part in a memorial parade and service for troops killed during his tour of Afghanistan.

Harry, 23, serves in the British Army and spent 10 weeks in Afghanistan earlier this year. He was withdrawn unexpectedly in March after news leaked out about his low-key deployment.

The prince appeared in uniform alongside around 200 other sailors, soldiers, marines and airmen at the parade, which took place on Edinburgh's famous Royal Mile. They made their way to St. Giles' Cathedral for a private memorial and thanksgiving service for the fallen service members.

Harry holds the rank of cornet, equivalent to a second lieutenant. He was deployed to Afghanistan's Helmand province where he served as a forward air controller.

His duties included calling in airstrikes and air support when necessary, guaranteeing the accuracy of bombing on the ground and guarding against incidents of friendly fire.

The parade and memorial service took place on the same day Britain's Ministry of Defense announced the deaths of four British soldiers in Afghanistan, and two days after Browne announced Britain will increase its presence in Afghanistan from 7,800 troops to 8,030 by next spring.

Watch Prince Harry at the memorial »

Prince Harry is the younger son of Prince Charles, the heir to the British throne, and the late Princess Diana, who died in a Paris car crash in 1997.

Last year, the military ruled he could not be sent to Iraq because publicity about the deployment could put him and his unit at risk.

Shortly after the news of the prince's deployment broke, several Islamist Web sites posted messages alerting their "brethren" in Afghanistan to be on the lookout for the royal soldier.

Prince Harry's brother, Prince William, is also an army officer. But as second in line for the throne, he is specifically barred from combat.

All About Prince Harry of Wales • Afghanistan