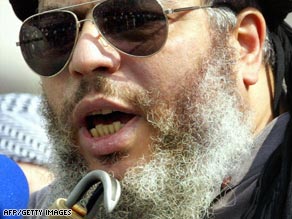 Abu Hamza al-Masri's followers include the "shoe bomber" and the only person charged in the 9/11 attacks.

UK authorities had ordered his extradition, but he appealed. Britain's High Court dismissed the appeal Friday, a spokesman for Britain's Home Office said.

That gives the Egyptian-born cleric, who lives in London, 14 days to apply to the High Court for permission to appeal to the House of Lords.

The one-eyed, hook-handed cleric faces 11 terrorism-related charges in the U.S. They include conspiracy in connection with a 1998 kidnapping in Yemen and conspiring with others to establish an Islamic jihad, or holy war, training camp in rural Bly, Oregon in 1999.

Abu Hamza, one of the highest-profile radical Islamic figures in Britain, is already in prison for inciting racial hatred at his North London mosque. He was convicted in Britain on 11 terror-related charges and sentenced to seven years prison in 2006.

Abu Hamza formerly preached at the Finsbury Park Mosque in London. His followers included the so-called "shoe bomber" Richard Reid, who was convicted of trying to light a bomb in his shoes on a trans-Atlantic flight. They also included Zacarias Moussaoui, who was charged in the U.S. over the Sept. 11, 2001, terror attacks.

The cleric was also convicted of possessing eight video and audio recordings, which prosecutors said he intended to distribute to stir up racial hatred. In all, police seized some 2,700 audio tapes and about 570 video tapes from two addresses -- one of them his home - during raids in 2003.

The material included a 10-volume "encyclopedia" of Afghan jihad, which prosecutor David Perry described as "a manual for terrorism." The texts discussed how to make explosives, explained assassination methods and detailed the best means of attack.

Both non-Muslims and Muslims condemned his preaching, which include praising the Sept. 11, 2001, attacks on the U.S., calling al Qaeda leader Osama bin Laden a hero, and describing the 2003 Columbia shuttle disaster as punishment from Allah because the astronauts were Christian, Hindu and Jewish.