LONDON, England (CNN) -- A glittering line-up is by no means a guarantee of a great night as previous charity gigs have proved -- but when that show has the Nelson Mandela factor, nothing it seems can go wrong. 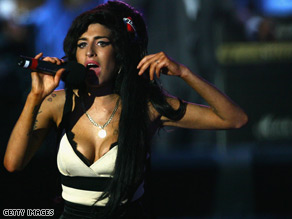 Amy Winehouse made the date despite a health scare.

Thousands flocked to London's Hyde Park -- and many more tuned in to watch on TV around the world -- as South Africa's former president celebrated his 90th birthday with a five-hour concert featuring dozens of singers, celebrities and sportsmen.

Though there were acts to please almost everyone, performances from safe indie guitar band Razorlight, candy pop stars Sugababes plus ageing rockers Simple Minds and Queen were never expected to produce the raw energy of a top class music festival.

And with leaden storm clouds gathering over the treetops, the whole event threatened to be a wash out even before performers hammered home the concert's serious messages about tackling HIV-AIDS.

But there was no doubting the electricity as Hollywood star Will Smith strode out onto the stage hand-in-hand with wife Jada Pinkett Smith and declared with enough force to keep the rain at bay: "The party begins now!"

Razorlight delivered a solid opening, followed by a dance performance and then the stunning sounds of the Soweto Gospel Choir, the night's first South African act.

After British singer Leona Lewis roused the crowd with her hit "Bleeding Love," the music was halted for a series of birthday wishes videos from stars including actor Morgan Freeman, singer Sheryl Crow and David and Victoria Beckham, whose appearance prompted some uncharitable jeering from the audience.

The tributes kept coming. Formula One driver Lewis Hamilton gave a moving speech about Mandela as he introduced the Sugababes, while later on Annie Lennox tugged heartstrings with the story of a young girl fighting a remarkable battle against AIDS.

Then Will Smith, who earlier got the crowd singing the theme tune to his career-making "Fresh Prince of Bel-Air" sitcom, was back -- this time to lead a rendition of "Happy Birthday" as Mandela himself took to the stage.

Visibly frail and needing a walking stick and the support of wife Graca to make it to the microphone, Mandela was nevertheless a commanding presence, his distinctive voice rising to a powerful crescendo as he appealed for the world to inherit his struggle against HIV-AIDS.

With photographs of Mandela through the ages flashing on giant screens either side of the stage and celebrity endorsements pouring in thick and fast, the concert could easily have descended into over-orchestrated sentimentally

But, testament to Mandela's inspirational spirit, it effortlessly rose above the mawkishness as the great man basked in a palpable wave of admiration.

As Mandela made his exit the crowd, now resolutely in festive mood, eagerly joined in with Eddy Grant's reprise of his 80s anti-apartheid hit "Gimme Hope Johanna," before the arrival of hotly anticipated singer Amy Winehouse, whose recent hospitalization had placed a question mark over her attendance.

A nervous hush descended as a befuddled-looking Winehouse tottered onto stage, looking like she might flee at any second. But as the band struck up, she produced terrific wild-eyed renditions of her hits "Rehab" and "Valerie," that whetted appetites for the finale she would sing later.

With the concert in full swing, no one seemed churlish enough to question why Queen, a band that broke an unofficial musicians' anti-apartheid boycott by performing in South Africa's Sun City in the 1980s, were among the lead acts.

And so it was to deafening cheers that Queen, Winehouse and many of the day's other stars, returned for the closing song -- a rendition of "Free Nelson Mandela" a campaign anthem that galvanized activists 20 years earlier but still rocks today.