(CNN) -- Ingrid Betancourt has been reunited with her children for the first time in six years since her abduction by FARC rebels in Colombia. 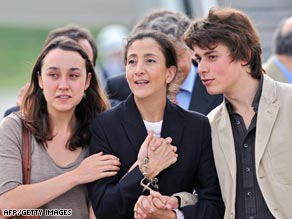 Ingrid Betancourt, center, with her daughter Melanie and son Lorenzo.

Betancourt, 46, who was rescued Wednesday in a daring operation by the Colombian Army, met with her daughter, Melanie Delloye, and son, Lorenzo Delloye-Betancourt, on the steps of a plane that had just arrived from France at a Colombian airport.

The three tearfully clung together, hugging and kissing each other fervently before disappearing inside the plane.

"They look so different, but they look so much the same at the same time; they are so beautiful," Betancourt told reporters.

"The last time I saw my children, Lorenzo was very small ... I could lift him up, he looked like my nephew who is right here," Betancourt said later, as she stood between her children, both now taller than she.

There are "many dreams I want to share with them ... I have so many things that I want to say to them," she added.

Her children, now adults, were accompanied on the plane by French Foreign Minister Bernard Kouchner.

Betancourt, a dual French national who grew up in Paris, is a cause celebre across Europe, where scores of cities had adopted her since her abduction in February 2002.

Her release dominated the pages and broadcasts of French newspapers, Web sites and television stations.

French President Nicolas Sarkozy had made her rescue a priority and in a televised address after her release expressed his happiness and thanks to the Colombian government, while urging FARC members to "stop this absurd combat, this fight."

"There were a lot of deceptions, but they always believed and they always had confidence," Sarkozy said. "There is always a small glimmer of hope and today the joy is huge. All of France is happy to welcome back Ingrid Betancourt."

Dominique Paille, a leading political figure in France, told the newspaper Le Monde her release was "extraordinary news" and a "grand day" for France, humanitarian works, and the government.

"They have never lost hope. They have always believed the liberation of their mother was possible," she told Le Monde.

Watch Betancourt talk about her release »

The French newspaper Liberation hailed Betancourt as a "national symbol," saying her long imprisonment had become a tragic example of the effects of the war between FARC and the Colombian government.

Le Figaro praised the "coup" of the Colombian Army's bluff in freeing Betancourt and the 14 other hostages, saying it was also a personal victory for Sarkozy. Read more about the rescue operation

French Justice Minister Rachida Dati told the newspaper the result was without precedent.

Former French President Jacques Chirac told Le Figaro it was a "true relief" for all of Betancourt's family and those close to her.

All About Colombia • FARC • Ingrid Betancourt