DONETSK, Ukraine (CNN) -- A frail Irene Famulak clutched her brother on the airport tarmac, her arm wrapped around him in a tight embrace, tears streaming down their faces. It was the first time since 1942 they had seen each other, when she was 17 and he was just 7. 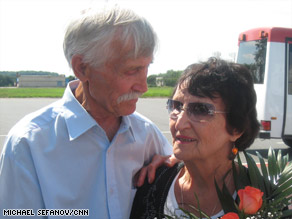 Siblings Wssewolod Galezkij and Irene Famulak were separated in 1942 when Nazis took her to a labor camp.

That was the night the invading Nazis came to take her away from her Ukrainian home.

"I remember it well because I kissed him good-bye, and he pushed me away," she said of her brother. "I asked, 'Why did you do that?' And he said that he doesn't like kisses."

"The Nazis told my mother that I was being taken to work in a German labor camp for six months. But it was, of course, much longer. I was there for years."

Both siblings survived the Holocaust and grew up on different sides of the Iron Curtain, not knowing the fate of the other.

But after 66 years apart, Famulak, 83, was reunited with her long lost 73-year-old brother, Wssewolod Galezkij. They held each other close this time, cherishing the moment.

"I don't believe anyone has ever known such happiness. Now, I truly believe I can die satisfied," Galezkij said.

Famulak made the long journey to Donetsk in eastern Ukraine from Philadelphia, Pennsylvania, after being contacted by the American Red Cross. The organization told her they had located her only surviving sibling.

Famulak said she spent World War II in a labor camp in Munich, Germany, working in the kitchens. She had been taken to the camp with her older sister. When it was liberated in 1945, Famulak stayed in Germany for several years, eventually emigrating to the United States in 1956.

She never saw her parents again after that day in 1942 when Nazis separated her from her family. She and her brother still have no idea what happened to their mother and father. Some of their siblings lived through the war, but later died; others, they never heard from again after being separated.

But her younger brother never gave up hope of tracking his sister down. He, too, was sent to a German labor camp, but after the war, he moved back to Ukraine, then a republic of the Soviet Union.

See photos of the "needle in haystack" reunion »

Under Soviet leader Josef Stalin, information on lost relatives was kept sealed, and Galezkij said it wasn't until reforms in the late 1980s, followed by the Soviet collapse, that he started making progress in finding his sister.

Even then, it took him more than 17 years to locate her in the United States. He broke down in tears as he spoke of his overwhelming happiness at finding her.

"When the Red Cross told me they had found her in America, it was such a joy," he said, sobbing.

In fact, he had to be taken to the hospital because he was so overcome when he first learned she was alive. At this week's reunion, there was a doctor on hand at the airport as a precaution.

Back in the United States, there were tears, too.

Linda Klein, the director of the American Red Cross Holocaust and War Victims Tracing Center, said the volunteer who helped the siblings find each other got caught up in the emotion herself.

"When I showed her the picture, she stood there and wept," Klein said. "She was beside herself."

Klein's group has reunited 1,500 families since it began work in 1990. She said the former Soviet Union released records in 1989 of concentration camps it liberated, greatly helping organizers find information on Holocaust victims.

The organization has 100 volunteers -- a third of them Holocaust survivors, Klein said. The group also helps families find information about their loved ones who died during the Holocaust. They have brought together more than 50 families this year. All of their work is free. She says it's often like "looking for a needle in a haystack."

"We're playing beat the clock right now," she said, adding, "It's about families that one day they were together and then they were apart."

"When a connection is made, there are just smiles all around."

That was the case for this family in Ukraine. Years of trauma, of separation, of not knowing what happened to loved ones, have been replaced by celebration.

In a picturesque orchard overlooking rolling fields, Galezkij, his wife and their neighbors laid out a feast for his American sister. As the vodka flowed, he told her how he had survived for a lifetime without her.

"He says he always thought he'd see me someday. He dreamt lots about me," Famulak said, as she sat next to her brother.

"And he wrote a song for me. When he went to sleep, he sang every night and cried."

With that, Galezkij, weakened by illness and age, burst into song. But this time, he sang the words with pure joy.

CNN's Michael Sefanov and Wayne Drash contributed to this report.

All About The Holocaust • Ukraine • Joseph Stalin • Adolf Hitler