(CNN) -- An Australian woman often described as the world's oldest blogger has died at the age of 108 after posting a final message about her ailing health but how she sang "a happy song, as I do every day." 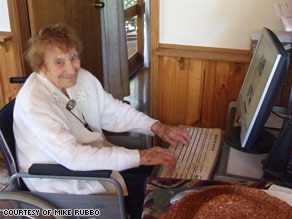 On the site, The Life of Riley, and in a series of videos post on YouTube, Riley mused on her day-to-day life. She also recounted living through two world wars and raising three children on her own while working as a cook and a bar maid.

"She had a wonderful memory, and an amazing zest for life," said her friend Eric Shackle, who met Riley at a nursing home while visiting his wife, who has since passed. "Just two weeks ago, she recalled the words of a song that was popular before World War II, and sang the chorus with me."

In a post titled "Washing Day," Riley wrote: "You 21st Century people live a different life than the one I lived as a youngster in the early 1900s. Take washing day, for instance. These days you just toss your dirty clothes into a washing machine, press a few switches, and it's done."

She then described how she helped do laundry as a youngster, starting with finding "a few pieces of wood to fire the copper for Mum."

"When the water in the copper began to boil, Mum would add a cupful of soap chips, and throw in a cube of Reckitt's Blue wrapped in a muslin bag to whiten the clothes," she wrote. "Then she put in all the dirty clothes, first rubbing out the stains with a bar of Sunlight soap. ... that was jolly hard work."

Riley was born in 1899 and would have turned 109 on October 20. She took up blogging at the suggestion of Mike Rubbo, who filmed a documentary on her life four years ago.

"First of all, I had to explain to her what a blog was and that took some doing," Rubbo said. "Then I got across the idea it was sort of a diary that she would share with the world.

"The reason for its popularity is that she was such a standout talent -- just so touching and funny and such a great story teller."

Various others have at times been labeled the world's oldest blogger, including Spain's Maria Amelia who was born in 1911 and given a blog by "my grandson, who is very stingy."

Riley was 12 years older than Amelia.

In her final post, dated June 26, Riley wrote how she felt weak "and can't shake off that bad cough."

She wrote of singing a "happy song, as I do every day," with a visitor to the nursing home, "and before long we were joined by several nurses, who sang along too. It was quite a concert!"

Said Shackle: "The thousands of loving messages she received from fellow bloggers in such places as Iceland, India, Iran, North and South America and Australia helped keep her alive in her final year.

"Her only regret was that she couldn't reply to them."