(CNN) -- Two teenage girls from Great Britain will fly home Thursday after spending a year behind bars in Ghana for drug-smuggling, the British High Commission in the west African country said. 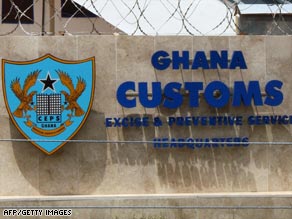 The girls were stopped by customs officials at Accra trying to smuggle drugs back to Britain.

Ghanaian police arrested the teenagers, identified as Yasemin Vatansever and Yatunde Diya, in July 2007 as they prepared to board a British Airways flight to London.

When officials searched their laptop bags as part of departure formalities, they found about 13 lbs (6 kg) of cocaine.

The girls, now 17, were 16 at the time of their arrest. They faced a maximum sentence of three years.

UK media have named the girls as Yatunde Diya and Yasemin Vatansever of north London.

In January, a juvenile court in Ghana sentenced the pair to nine months in jail for trying to smuggle cocaine out of the country.

At the time, a British Foreign Office spokesman said the teens would not have to serve the full sentence because they had already spent more than six months in custody.

But soon afterward, Ghanaian authorities changed their minds. The girls were housed in a correctional home for girls in the country's capital, Accra.

Fair Trials International, a UK-based group that provided legal assistance to the pair, called the girls "pawns in a larger operation."

Authorities in Ghana had said a man paid the girls £6,000 (about $11,700) to fly to Ghana to retrieve the laptop bags containing the drugs from two of his associates, according to the country's national news agency.

Those men have not been caught.

"The girls have served their full sentences, but the men who groomed them and lured them to Ghana remain free to target other vulnerable young women," said Catherine Wolthuizen, Fair Trials' chief executive, in a statement this week.

Ghana and other West African countries have become a transit point for drugs headed to Europe. The girls were arrested in a joint Britain-Ghana drug detection operation, the UK's customs agency said Wednesday.