NAPLES, Italy (CNN) -- The Italian prime minister plans to declare Friday that the worst part of a garbage crisis in Naples is over, even though a visit to one neighborhood found residents still living amid huge piles of trash. 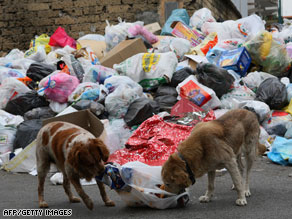 Garbage has been piling up in the streets of Naples since a municipal dump was closed on December 31.

Prime Minister Silvio Berlusconi is due to make the announcement after a cabinet meeting in Naples, according to the national ANSA news agency. He is expected to say that the first phase of his government's response to the crisis -- the emergency phase -- is over.

That first phase has involved cleaning up rotting garbage that has accumulated in the streets since the government closed one of two dumps in this southern Italian city.

Now, Berlusconi plans to focus on the second phase of his response to the garbage crisis. That involves long-term solutions such as implementing a viable system of garbage collection, incineration and recycling.

Despite the prime minister's planned announcement, however, a CNN correspondent who visited one neighborhood on the outskirts of Naples on Friday found residents still tossing garbage into the street. They said they had nowhere else to put it and complained of a lack of trash bins and recycling facilities.

The piles were smaller than a few months ago, and the odor was not as bad, but the visit demonstrated that Berlusconi and his government have a long way to go in addressing the crisis. iReport.com: See trash piled high

The prime minister told ANSA that the government had made great strides in addressing the problems.

Naples' garbage problems have been around in some form for nearly 15 years, but they flared December 31, when the Italian government closed one of the area's two working dumps at the request of nearby residents.

As trash piled up, officials closed some schools to protect children from noxious fumes.

The government moved some waste to temporary landfills and even shipped some of it to other parts of Italy and Europe.

In May, two months after he took office, Berlusconi appointed a "garbage czar" to focus on the crisis, giving him the authority to open new dump sites and landfills in the region.

All About Naples • Italy