(CNN) -- Italian newspapers, an archbishop and civil liberties campaigners expressed shock and revulsion on Monday after photographs were published of sunbathers apparently enjoying a day at the beach just meters from where the bodies of two drowned Roma girls were laid out on the sand. 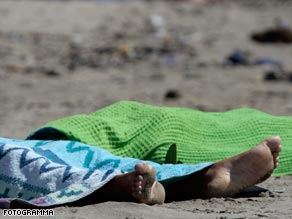 Photographs of the dead Roma girls on a beach caused outrage in Italy.

Italian news agency ANSA reported that the incident had occurred on Saturday at the beach of Torregaveta, west of Naples, southern Italy, where the two girls had earlier been swimming in the sea with two other Roma girls. Reports said they had gone to the beach to beg and sell trinkets.

Local news reports said the four girls found themselves in trouble amid fierce waves and strong currents. Emergency services responded 10 minutes after a distress call was made from the beach and two lifeguards attended the girls upon hearing their screams.

Two of them were pulled to safety but rescuers failed to reach the other two in time to save them.

Watch why the photos have generated anger »

The Web site of the Archbishop of Naples said the girls were cousins named Violetta and Cristina, aged 12 and 13.

Their bodies were eventually laid out on the sand under beach towels to await collection by police. Photographs show sunbathers in bikinis and swimming trunks sitting close to where the girls' feet can be seen poking out from under the towels concealing their bodies. A photographer who took photos at the scene told CNN the mood among sunbathers had been one of indifference.

Other photos show police officers lifting the bodies into coffins and carrying them away past bathers reclined on sun loungers.

"While the lifeless bodies of the girls were still on the sand, there were those who carried on sunbathing or having lunch just a few meters away," Italian newspaper La Repubblica reported.

Corriere della Sera said that a crowd of curious onlookers that had formed around the bodies quickly dispersed.

"Few left the beach or abandoned their sunbathing. When the police from the mortuary arrived an hour later with coffins, the two girls were carried away between bathers stretched out in the sun."

The incident also attracted condemnation from the Archbishop of Naples, Cardinal Crecenzio Seppe. "Indifference is not an emotion for human beings," Seppe wrote in his parish blog. "To turn the other way or to mind your own business can sometimes be more devastating than the events that occur."

Recent weeks have seen heightened tensions between Italian authorities and the country's Roma minority amid a crackdown by Silvo Berlusconi's government targeting illegal immigrants and talk by government officials of a "Roma emergency" that has seen the 150,000-strong migrant group blamed for rising street crime.

That has provided justification for police raids on Roma camps and controversial government plans to fingerprint all Roma -- an act condemned by the European Parliament and United Nations officials as a clear act of racial discrimination. Popular resentment against Romanies has also seen Roma camps near Naples attacked and set on fire with petrol bombs by local residents.

In a statement published on its Web site, the Italian civil liberties group EveryOne said Saturday's drowning had occurred in an atmosphere of "racism and horror" and cast doubt on the reported version of events, suggesting that it appeared unusual for the four girls to wade into the sea, apparently casting modesty aside and despite being unable to swim.

"The most shocking aspect of all this is the attitude of the people on the beach," the statement said. "No one appears the slightest upset at the sight and presence of the children's dead bodies on the beach: they carry on swimming, sunbathing, sipping soft drinks and chatting."