LONDON, England (CNN) -- The oldest known surviving copy of the New Testament gets the modern touch Thursday when parts of it go online for the first time. 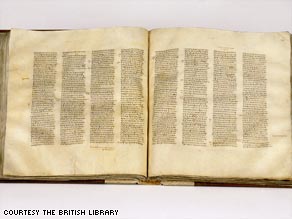 The full manuscript of the Codex Sinaiticus will be online a year from now.

The British Library plans to begin publishing the Codex Sinaiticus, a 4th century text handwritten in Greek, on its Web site. The Gospel of Mark and the Book of Psalms go online Thursday. The full manuscript is to be online in a year.

Translations of the Codex Sinaiticus have long been widely available, but publishing images of the manuscript online will let anyone see pages that, until now, have been viewed in detail mainly by academia.

As the Web site becomes operational, it will show photographs of each page of the text, with links to translations in English and German. There will also be a search function.

"It contains the earliest complete copy of the New Testament," said Scot McKendrick, the head of Western Manuscripts at the British Library.

The library announced plans three years ago to digitize the 1,600-year-old book, a tough job since pieces of the manuscript reside in four countries.

"It was a challenge, but it was ... also very exciting," said Juan Garces, the curator of the project.

Photographers took digital pictures of the text in United Kingdom, Russia, Germany and Egypt to put the entire manuscript online.

"It unites something that belongs together," he said.

The complete text once was housed at the Monastery of St. Catherine in Sinai, Egypt, before it came to the attention of a German scholar, Constantine Tischendorf, in the 19th century. He took parts of it to Germany and Russia. The British Library later bought several hundred pages from the Russians.

Digitizing the text is a windfall for scholars, but the main goal was to make the Codex available to everyone.

"It makes it accessible, and it opens up to anyone who can access it via the Internet," Garces added.

Eventually, the manuscript will be translated into Russian and modern Greek.

"The user will come to the Web site and will be able to look at images of each page of Codex Sinaiticus, will be able to zoom in and out and look around the page and see the page lit in standard light." Garces said.