Uncovering the secrets of storytelling

LONDON, England (CNN) -- We have all heard that time-worn phrase trotted out about everyone having at least one book inside them, and most of us like to believe it's true. 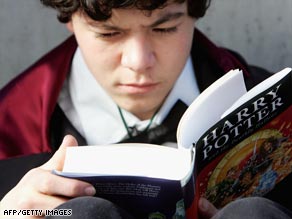 Telling stories is engrained into us as children, and it is a central part of how we communicate.

And why not? Humans after all are natural storytellers. From the gossip we pick up at the watercooler, to the soap operas we watch on TV, telling each other stories seems hard-wired into our DNA.

But how do you make those stories engaging and exciting? That's the million dollar publishing advance question all aspiring storytellers must grapple with, and one of the reasons that for many, that long-cherished book never gets beyond the planning stage.

Well, you won't have that excuse anymore. CNN's Spirit of has compiled for your delectation a brief guide to the dos and don'ts of storytelling, courtesy of some sound advice from great writers past and present. And let's be honest, they should know.

The American author Kurt Vonnegut whose most famous novel "Slaughterhouse-Five" is a fictional account of his experience as a POW in the German city of Dresden when it was firebombed by the Allies in World War Two once set out a list of rules on how to write a short story.

His first piece of advice is sacrosanct and one by which all stories live or die.

"Use the time of a total stranger in such a way that he or she will not feel the time was wasted," he wrote.

Seems obvious, doesn't it? Yet, it is amazing how many books, films, plays and even drunk friends at parties forget that, first and foremost, stories are meant to entertain.

But what about instruct, I hear you grumble over your dog-eared copy of "The Grapes of Wrath"? Surely many of the greatest tales ever told, from the Bible to "Midnight's Children" edify the reader as much as keep them gripped.

In a career spanning over half a century the South African novelist and anti-apartheid activist Nadine Gordimer has written extensively about her country's political and social upheavals.

In spite of some of her novels being banned at the time by South Africa's white-only government, the Nobel laureate insists that any author who tries to push a message on a reader ahead of narrative is in danger at best of producing bad writing, and at worst of lapsing into propaganda.

"The moment the fiction writer, the novelist, the storyteller, the poet starts to think that 'I am writing to persuade, I am writing propaganda' then this is a tremendously bad thing for whatever talent you have," she tells CNN. "You cannot put it at the service of something like this."

The British author Doris Lessing is even more emphatic. "If you're going to write to a formula of some kind the writing is dead, which we know by having seen it so often," Lessing says.

And with that we'll return somewhat sheepishly to Vonnegut's rules on storytelling, which it must be said he did note that most great writers tend to break, with the exception of the first.

Rules number two and three relate to the creation of character, and are more practical than the first: "Give the reader at least one character he or she can root for" he wrote, and then about motivation, "Every character should want something, even if it is only a glass of water."

Now for rule four: "Every sentence must do one of two things -- reveal character or advance the action." Put more simply, every word must count.

There's nothing more frustrating when reading a story or when watching a movie than being led off at a tangent as the author indulges in some pointless navel-gazing. How many more celluloid panoramas of Manhattan, for example, do third-rate filmmakers need to show us before they realize we get the message? We already know the New York skyline is beautiful.

The great American writer Ernest Hemingway despised this kind of flabby, indulgent storytelling. Early on in his career he had a $10 bet with colleagues that he could produce a story just six words long. This is what he came up with:

"For sale: Baby shoes, Never worn." Needless to say he won the bet. Share your own six word story and we'll publish the best

The English writer and essayist George Orwell was also a great advocate of an economic style and like Vonnegut compiled his own set of rules on how to write well. Orwell said that a long word should never be used when a shorter equivalent existed, and that redundant words should always be cut out.

Back to Vonnegut, who as you may have by now picked up, had a very wry sense of humor. For rule number six he wrote: "Write to please just one person." It may be that you are aiming your story at others but, if you're not happy with what you're producing, it's unlikely you'll manage to convey much enthusiasm to an audience.

Or as Vonnegut put it: "If you open a window and make love to the world, so to speak, your story will get pneumonia."

And on that note we shall end our lesson for today. Armed with this advice you may now go away and write the great epic novel of the 21st century, or at the very least stop boring your mates at parties.

Can you give us a tale in six words?
Ernest Hemingway famously wrote a story in just six words: "For sale: Baby shoes, Never worn." Do you think you could match his efforts? If so, CNN's Spirit of would like to hear from you. Leave your six word stories below and we will publish the best on the Web site.