(CNN) -- The U.S., European Union and international security organizations Friday called for an end to fighting between Georgia and militant separatists that has dragged in Russian forces. 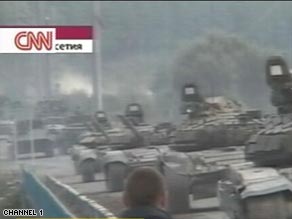 Russia's Channel 1 shows heavy tanks purported to be on their way to South Ossetia.

Both men were attending the opening of the Summer Olympics in the Chinese capital and spoke during a luncheon hosted by Chinese President Hu Jintao.

But Putin, according to his spokesman, said: "There are lots of volunteers being gathered in the region, and it's very hard to withhold them from taking part. A real war is going on."

White House spokeswoman Dana Perino said: "I want to reiterate on [President Bush's] behalf that the United States supports Georgia's territorial integrity and we call for an immediate cease fire.

"We urge all parties, Georgians, South Ossetians and Russians to de-escalate the tension and avoid conflict. We are working on mediation efforts to secure a cease fire and we are urging the parties to restart their dialogue."

The U.S. military was also reviewing plans for the possible evacuation of the more than 2,000 of its citizens in the Republic of Georgia, two military officials said Friday.

Russian Foreign Minister Sergei Lavrov told his counterparts in the United States and Germany and the European Union's foreign policy chief that Georgia was the aggressor and should immediately withdraw its troops from South Ossetia.

The EU and the Organization for Security and Co-operation in Europe (OSCE) are sending envoys to Georgia to secure a cease-fire, but a senior U.S. State Department official said the United States would only send a representative after a cease-fire is in place.

The European Union said it was working with other parties "towards a ceasefire in order to prevent further escalation of this conflict."

EU spokeswoman Christina Gallach told CNN: "We think it is not acceptable to see these scenes of bloodshed and destruction."

"War would have a devastating impact for the entire region. I urge the Georgians, South Ossetians and Russians to cease fire, end military action and stop further escalation. We need to pull back from the brink of a full-fledged war."

NATO Secretary-General Jaap de Hoop Scheffer issued a statement Friday saying he was seriously concerned about the recent events in the region, and he called on all sides to end armed clashes and begin direct talks.

Carmen Romero, a NATO spokeswoman in Brussels, said NATO was in regular contact with Georgia's president and was talking to Russia.

Britain also urged all sides to bring an immediate end to the violence. "We are monitoring developments. We urge an immediate cease-fire in the fighting in South Ossetia and for a resumption of direct dialogue between all parties."

Georgia, formerly part of the Soviet Union, is now looking west and has ambitions of joining NATO.

South Ossetia has longed for and sometimes fought for independence since the 1920s when the Soviet Government made it an autonomous region within Georgia.

After the collapse of the Soviet Union, Georgia broke away from Moscow in 1991 and South Ossetia voted overwhelmingly for its own independence.

Violence has been mounting in the region in recent days, with sporadic clashes between Georgian forces and South Ossetian separatists.

An emergency session of the U.N. Security Council on Friday discussed the dramatic escalation of violence. The session ended Friday morning without a statement about the fighting.