OUTSIDE TBILISI, Georgia (CNN) -- Evidence of the fighting is everywhere in the Georgian city of Gori -- blood on the ground, the smell of smoke in the air, and wrecked cars in the street, according to a CNN crew that drove through the area. 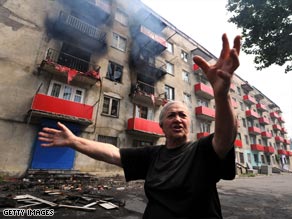 Although Georgian officials and witnesses said Russian jets shelled parts of the city Tuesday morning, a Russian general denied it.

"We were not undertaking any strikes there," said Colonel-General Anatoly Nagovitsin, deputy head of the general staff. "There are no drafted troops in the region, only professionals."

He added that Russian troops entered the conflict last week, because "it was crucial to weaken the military potential of the aggressor, so that it could never think about repetition of this."

Nagovitsin was referring to the Georgian incursion into the breakaway republic of South Ossetia, which preceded the Russian involvement.

The attacks in Gori, about 50 miles northwest of the capital Tbilisi, occurred before Russian President Dmitry Medvedev and French President Nicolas Sarkozy announced a plan late in the day for ending the conflict in Georgia.

Watch a report from Gori as Georgian troops pull out »

A Dutch cameraman was killed and a correspondent wounded in a military incident Tuesday morning, the Dutch Foreign Ministry confirmed. Their blood could be seen staining the ground where they fell.

By midday, an apartment building was still burning from a Russian rocket that had exploded in the air, sending fiery shrapnel shooting into the structure and the ground, witnesses said.

A woman who lives in the building was in tears as she showed a CNN crew pieces of what she said were Russian military munitions.

Rockets made craters in Gori's central square, shop windows were blown out from the force of explosions, and many storefronts were pocked by bullet holes, CNN Producer Mike Sefanov said.

The fighting has caused many of the residents to flee. Some have gone to Tbilisi and others to Mtskheta, just north of the capital; others have gone to centers for the internally displaced or found shelter elsewhere.

Georgians say there is still sporadic fighting happening in South Ossetia, but that is difficult to confirm. The drivers of the few cars that met the CNN crew on the road into South Ossetia gave a mixed report about safety up ahead.

One man warned of looting in the South Ossetian village up the road.

On the other side of Gori, on the way to Tbilisi, there was evidence that Georgian fighters apparently had failed to fend off attacks. A tank and other Georgian military vehicles were abandoned along the road; some had been blown up.

Interactive map: See how far the Russians have advanced »

In the sky overhead, the CNN crew saw helicopters firing flares into the Georgian countryside. It was difficult to tell whose choppers they were -- though the markings didn't look Georgian -- and precisely what they were doing in the air over Georgia.