U.S. may seek to punish Russia for Georgia conflict

WASHINGTON (CNN) -- Furious over Russia's invasion of Georgia, the United States and its allies are weighing steps to diplomatically isolate Moscow as punishment for the conflict, senior administration officials said Tuesday. 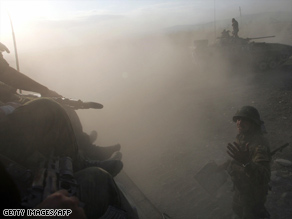 Russian soldiers take position during clashes in South Ossetia in Georgia on Monday.

"It is not business as usual anymore with the Russians, and there are consequences for doing what they are doing," one senior U.S. official said.

Two senior administration officials said Tuesday that they could not speak for attribution because no final decisions had been made. But the United States will be discussing steps to take with its allies in the NATO alliance and the European Union, they said.

The United States boycotted preparatory meetings Tuesday for a NATO meeting with Russia, and NATO has canceled a naval exercise with Russian forces in the northern Pacific.

Washington and its allies also are discussing whether to drop Moscow from the Group of Eight industrialized economic powers, the official said.

Russian President Dimitry Medvedev had pledged to strengthen Russia's role in the international community and world economy. But the U.S. official said that Russia, in its current situation, has "much more to lose" than the Soviet Union did when it invaded Czechoslovakia in 1968.

"Russia has one foot integrated into the international economy and community of states and one foot that is not quite in it," the official said. The Russians should consider "whether they haven't achieved some tactical objectives at the expense of some strategic objectives," the official added.

The United States has criticized the Russian move against Georgia, its ally, as "disproportionate" and demanded a cease-fire, to which French President Nicolas Sarkozy said both sides agreed late Tuesday.

"I wanted to make very clear that the United States stands for the territorial integrity of Georgia, for the sovereignty of Georgia; that we support its democratically elected government and people, and are reviewing options for humanitarian and reconstruction assistance to Georgia," Secretary of State Condoleezza Rice said Tuesday. "But the most important thing right now is that these military operations need to stop."

President Bush said Monday that Russia's actions "substantially damaged Russia's standing in the world" and "jeopardized its relations" with the United States and Europe.

Russia's ambassador to the United Nations, Vitaly Churkin, criticized the Bush administration for treating Georgian President Mikhail Saakashvili like "a naughty child" as fighting raged between the two nations.

However, the ambassador held out hope for restored relations.

The cease-fire agreement calls on both Russian and Georgian forces to withdraw to positions held before August 6. According to the second administration official, officials from several countries have told a variety of Russian officials, " 'you know you cannot stay," to which the Russian response is, " 'we don't want to stay.' "

The official called this a "good sign and encouraging sign" but warned that the international community needed to send Russia a clear message against "mission creep."