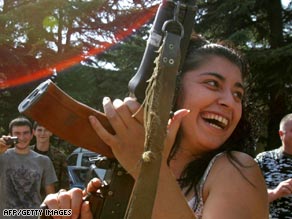 "This is not an easy choice to make, but it represents the only possibility to save human lives," Medvedev said Tuesday in a televised address.

He called on other countries to follow Russia's lead, which comes in the wake of the Russian-Georgian conflict which erupted earlier this month.

U.S. President George W. Bush led the condemnation with a strongly worded statement said: "The United States condemns the decision by the Russian president to recognize as independent states the Georgian regions of South Ossetia and Abkhazia.".

Bush said Russia's move was "inconsistent" with the French-brokered cease-fire agreement that ended the fighting and called on Russia to "reconsider this irresponsible decision."

Bush added: "The territorial integrity and borders of Georgia must be respected, just as those of Russia or any other country. Russia's action only exacerbates tensions and complicates diplomatic negotiations."

"It will also not work. It is contrary to the principles of the peace agreement, which Russia recently agreed... [it] further inflames an already tense situation in the region," Miliband said.

The European Union also urged a political solutions to the tensions in Georgia.

Speaking to CNN's Matthew Chance, Medvedev said the move was in line with international law.

"It is internationally recognized that if a people based on all these [U.N.] provisions express their will to have an independent existence... any other state in the world has the right to recognize this independence whether you like it or not," the Russian president said.

The stand-off has exacerbated already frayed relations between Russia and the West.

Moscow has been infuriated by U.S. plans to build a missile defense shield in eastern Europe. It said an agreement signed last week to base missiles in Poland would open that country up to an attack in the event of conflict.

Medvedev said: "The most important thing for us is that our American colleagues be pragmatic, that they defend the genuine interests of the American people, as opposed to defending made-up ideological schemes.

"If everything will be fine in that regard, I am convinced that we'll be able to agree on a very broad range of issues. We don't want any complications, we don't need another Cold War or its modern-day remake."

He signed the order a day after it was overwhelmingly approved by both houses of Russia's parliament.

Georgian President Mikheil Saakashvili said it was "clear around the world that Russia is acting as an aggressor state."

"My appeal to the free world is to condemn and reject Russia's dangerous and irrational decision -- not only for Georgia's sake -- but for the sake of preserving the fundamental basis of international law and order.

"In the days and weeks ahead we will work with the international community to prevent this decision from having any effect on the sovereignty of my country and from further undermining the international order."

Western nations have expressed support for Georgia, which aspires to NATO and European Union membership, with the U.S. dispatching a major humanitarian aid mission.

South Ossetia and Abkhazia broke away from Georgia during civil wars in the 1990s. Russia strengthened ties with them after the U.S. and much of Europe recognized the independence of the Serbian province of Kosovo earlier this year, a move that Moscow had warned against.

Georgian troops attacked pro-Russian separatists in South Ossetia on August 7, triggering a Russian invasion of Georgia. Russian tanks, troops and armored vehicles poured into South Ossetia and Abkhazia the following day, advancing into Georgian cities. Each side offered conflicting figures on how many people died in the fighting.

The Bush administration has insisted that both Abkhazia and South Ossetia remain part of Georgia, a U.S. ally that is seeking NATO membership, and says resolving the disputes between the Georgian government and the regions "should be a matter of peaceful negotiations and discussions among the parties."