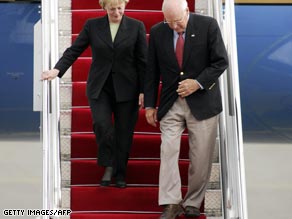 In remarks made after meeting the president of Azerbaijan, Cheney said the U.S. had an abiding interest in the region's stability.

During the trip, which also takes in Ukraine and Georgia, high on the agenda will be the conflict between Georgia and Russia, and Moscow's subsequent recognition of two breakaway Georgian provinces as independent.

Cheney said Wednesday, "One of the basic foundations of security and peace is respect for national borders, a principle that is endangered today.

"Although we decided on this visit months ago, we met this evening in the shadow of the recent Russian invasion of Georgia, an act that has been clearly condemned by the international community.

"President Bush has sent me here with a clear and simple message to the people of Azerbaijan and the entire region: The United States has deep and abiding interests in your well-being and security."

Azerbaijan, which borders Georgia and Iran and sits along the Caspian Sea, is an oil- and gas-rich nation and a key U.S. ally in the region.

They briefed Cheney on their assessments of the energy situation in the country and the broader Caspian region, especially in light of Russia's recent military actions in neighboring Georgia, the White House said. They also described their activities, the region's significant energy potential and some of the challenges they face, the White House said.

A senior U.S. administration official said last week that the two will discuss recent events neighboring Georgia, along with Azerbaijan's cooperation in the war on terrorism and its troop contributions in Iraq and Afghanistan.

The United States wants to ensure a diversity of energy supplies and supply routes to Europe, the administration official said, and countries like Azerbaijan are key to developing additional resources.

The official said the recent conflict with Russia means the United States and Europe are even more interested in diversifying energy infrastructure, pipelines and supplies to lessen Europe's reliance on Russia as an energy provider.

"The level of confidence and trust that people have in Russia's overall reliability has been put in serious question by what's happened," the official said, "and I would assume that extends to energy and the issue of energy supplies."

After Azerbaijan, Cheney plans to visit Georgia, where he is expected to meet President Mikheil Saakashvili and discuss the conflict with Russia. Cheney will also assess the U.S. and international relief operations after the fighting.

Cheney will be the highest-level U.S. official to visit Georgia since the crisis between Georgia and Russia began.

"I'm sure that the vice president and President Saakashvili will also look beyond the immediate situation and discuss in depth the need for a comprehensive long-term strategy by the international community to help Georgia recover and rebuild, including the critical task of supporting the democratic choice of the Georgian people to integrate further with Euro-Atlantic institutions, including NATO," the administration official said.

The Georgia-Russia conflict and NATO will also be a major topic when Cheney visits Ukraine on Friday, the official said.

Cheney finishes the trip in Italy where he plans to address the annual Ambrosetti Forum on Lake Como, giving a speech on challenges facing the trans-Atlantic alliance. He then plans to meet both Italian Prime Minister Silvio Berlusconi and President Giorgio Napolitano.

The trip will be Cheney's first to Azerbaijan and Georgia, and his first to Ukraine since he became vice president, his office said.

All About Russia • Republic of Georgia • Azerbaijan