(CNN) -- The United States has backed Ukraine's bid for NATO membership a day after similarly supporting Georgia, in a move which may further stoke tensions with Russia. 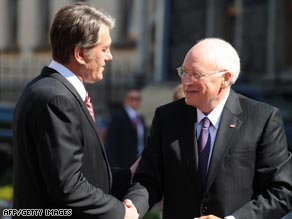 U.S. Vice-President Dick Cheney met with Ukraine's pro-Western president Victor Yushchenko in the capital of Kiev on Friday, the third stop of a tour that has already taken him to two other former Soviet republics -- Georgia and Azerbaijan.

The meeting came on the same day as the United States' top warship arrived in the Georgian port of Poti to deliver humanitarian supplies, fueling Russia's fears that its superpower rival is making its presence felt in the Baltic region.

Russia said the vessel's technical characteristics raised questions about whether it should be allowed into the area, Russian news agency Interfax reported.

Russia is unhappy that its former states are seeking to join the 26-nation NATO defense alliance, and last month's conflict with Georgia over two disputed territories was seen by many as an attempt to assert its power.

Cheney repeated the statement he made a day earlier that Russia's military actions in Georgia last month cast "grave doubts" on Moscow's intentions and reliability as an international partner.

The vice-president commended Yushchenko's trip to Georgia soon after the conflict broke out in early August and delivered a message to Ukraine from President Bush.

"The United States has a deep and abiding interest in your well-being and your security," Cheney said.

"Ukrainians have a right to choose whether they wish to join NATO. And NATO has a right to invite Ukraine to join the alliance when we believe that you are ready and that the time is right. No outside country gets a veto."

The USS Mount Whitney is the third American naval ship to deliver supplies to Georgia.

The U.S. Coast Guard Cutter Dallas and the USS McFaul delivered more than 230,000 pounds of aid to the port of Batumi, south of Poti, when they arrived in recent weeks, the Navy said.

The Mount Whitney is the command ship for the Sixth Fleet of the U.S. Navy, which calls it the most sophisticated vessel of its kind ever commissioned. It will also coordinate the work of a group of NATO ships currently in the Black Sea, Interfax reported.

Russia's foreign ministry said it would not respond militarily to the strengthening of the NATO group in the Black Sea, but may raise the issue with the United Nations, Interfax said.

Cheney is the highest-level U.S. official to visit Georgia since the crisis with Russia, which saw Russian troops take strategic positions in the breakaway regions of South Ossetia and Abkhazia.

His brief visit to Georgia's capital of Tbilisi on Thursday followed Wednesday's announcement by the United States of a $1 billion aid package to help with humanitarian aid and reconstruction after the conflict.

The aid package is on top of $30 million in humanitarian assistance which Cheney said the United States had already given to Georgia.

U.S. Secretary of State Condoleezza Rice has said the Georgia aid package is intended for humanitarian aid and reconstruction -- not to rebuild the Georgian armed forces that the Russians rolled over in early August. Russian leaders have raised questions about U.S. intentions about providing Georgia with arms.

"It is not yet time to look at the question of assistance on the military side," she said.

Rice said the biggest share of the aid, $570 million, is to be sent over the next five months. The remaining $430 million will be up to the next administration.

All About Republic of Georgia • United States • Russia • International Relations