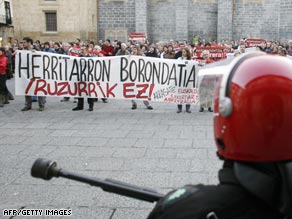 Supporters of the BMA attend a demonstration in April 2008.

Just hours after the ruling, a bomb was found attached to the underside of a Spanish national police officer's private car in Bilbao, the largest Basque city, a police spokesman told CNN.

The bomb did not explode. The officer had driven it several kilometers to work at police headquarters in Bilbao, where the device was discovered Tuesday afternoon, the spokesman said.

Bomb squad experts were trying to deactivate it.

The court outlawed the Basque Nationalist Action party, or ANV, as it is known locally. It has about 100 elected town councilors in Basque city halls, and they are expected to lose their seats under the ruling, an analyst told CNN.

A lower court judge suspended the party's activities last February, preventing it from running candidates in Spain's national elections last March, due to suspicions about its ties to ETA.

ETA has sometimes used limpet bombs attached to the underside of the cars of its victims. There was no immediate claim of responsibility for Tuesday's bomb under the police officer's car.

Spanish courts previously outlawed another political party, Batasuna, for its ties to ETA, and prosecutors and lawyers for the government argued before the Supreme Court that Basque Nationalist Action was a kind of successor to Batasuna.

But a Basque Nationalist Action spokeswoman vowed that her group "will continue its political work" on behalf of the Basque left, according her comments played on SER radio.

Spanish authorities --- from the government to the courts to the police -- have tried to choke off support for ETA in recent years, with numerous arrests of ETA suspects, convictions at trial, restrictions on political activities of known ETA supporters and a clampdown on clandestine ETA financing.

The Supreme Court's chief justice, Francisco Hernando, told reporters Wednesday that in addition to outlawing Basque Nationalist Action, the court would also immediately consider a similar ban on another leftist party, the Communist Party for Basque Lands, or PCTV as it is known locally, also for suspected links to ETA, the court's press office said.

The PCTV holds seats in the Basque regional parliament, and it activities were also suspended last February by a lower court judge.

Yet ETA did not officially end its cease-fire until June 2007.