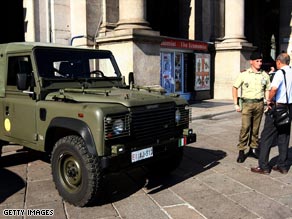 The army has been deployed in major cities aross Italy since the early summer.

Police also arrested a third man wanted by authorities for belonging to the same clan, but not directly linked to the killings.

The victims were gunned down in a hail of bullets as they stood outside a store selling ethnic goods. The attack sparked a riot by immigrants who complained about "racism" but officials suspect a dispute over drug trafficking.

Those arrested, Alessandro Cirillo, Oreste Spagnuolo and Giovanni Letizia, were on the list of the 100 most dangerous men and wanted criminals in Italy.

The arrests were part of a large police operation aimed at cracking down on organized crime in the Campania region and in particular the powerful Casalesi clan belonging to the Neapolitan mafia known as Camorra.

The Casalesi clan and the area where the arrests took place prominently featured in the best seller "Gomorrah," a book written by Roberto Saviano who now lives under constant police protection.

"This is a great day for the Italian state," said Carmelo Casabona, head of the police in Caserta. "The operation was an immediate, concrete and strong answer to organized crime in this region."

Two weeks ago, the Italian interior minister announced the deployment of 400 additional police officers in the area. And the Italian military will deploy 500 troops by Saturday as part of a large operation Italian officials say is aimed at "reclaiming the control of the territory."

"Our objective is to take the water away from the sharks," said Italian Interior Minister Roberto Maroni.

He explained that the additional police officers are already working, while the army's role will be defined at a key meeting Friday in Caserta.

In the suspects' home, police found weapons including two AK-47s that investigators say were used to carry out the killings in Castelvolturno, as well as police overalls, one gun and one pump rifle.

Authorities also arrested dozens of other people, including the wife of Francesco Schiavone, aka "Sandokan," the head of the Casalesi clan who was arrested a decade ago and is serving a life-time prison sentence.

As part of the same operation, Italian financial police confiscated 43 companies and 134 apartments spread throughout central and southern Italy belonging to the Casalesi clan, worth more than 100 million euros ($144 million).