(CNN) -- In April 2007, UEFA's executive committee voted to accept a joint proposal from Poland and Ukraine to host the European football Championships in 2012. 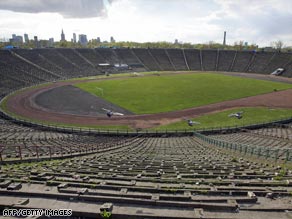 Poland faces a struggle to upgrade many of its venues, such as Tenth Anniversary stadium in Warsaw.

The decision to award the tournament to Poland -- a former communist country -- and Ukraine -- a former Soviet Republic -- was viewed with surprise by many in the world of sport as they had defeated a rival bid from established football powerhouse Italy.

In addition to providing economic benefits -- hosting Euro 2008 was worth over $450 million to the Austrian economy according to its government -- staging such a high-profile international event would cap their remarkable transformation into credible democracies in the eyes of the world.

However, both countries have had to address a number of problems.

Political instability remains an issue in Ukraine -- the fragile ruling coalition recently collapsed -- while Poland's national team narrowly avoided a suspension after football's world ruling body FIFA said its federation had done little to stamp out corruption. A match-fixing scandal in the domestic league in 2005 led to about 70 people being arrested, though no one has been prosecuted.

Significantly, neither country has hosted a major sporting event and concerns remain about the shortage of adequate stadiums, high-quality hotels and poor transport infrastructure in both Poland and Ukraine.

With the proposed semi-final venues in the eastern Ukrainian city of Donetsk and the Polish capital Warsaw, fans would currently be faced with a 30-hour train journey to attend both games. Although there are plans to expand and improve the highway linking the nations.

The opening match is scheduled to be staged at a new 70,000-capacity National Stadium in Warsaw when construction work is completed in 2009 at a cost of $800 million. The final will be held at Kiev's redeveloped Olympic Stadium, however all 12 proposed venues need considerable work in order to comply with international standards.

The remaining games will be held in the Polish cities of Gdansk, Poznan, Wroclaw, Chorzow and Krakow, as well as the Ukrainian cities of Lviv and Dnipropetrovsk.

Concerns about the readiness of the co-hosts led to a warning in June this year from UEFA President Michel Platini that they risked losing the right to stage the tournament if stadiums in their capitals were not ready.

This prompted a defiant response from the prime minister of Poland, who vowed to prove the skeptics wrong and make the 2012 European Championship an organizational triumph.

"We are aware that there are countries interested in us failing and the only successful rebuke to that will be better coordination and solidarity in our actions," Polish premier Donald Tusk told reporters at the time.

Bizarrely, the head of Poland's Football Association, Michal Listkiewicz, offered Uefa an alternative option for 2012 after voicing his concerns about Poland's ability to overcome its transport issues.

"If the European Championships took place in 2016, we would have no problems about being ready then," Listkiewicz told Germany's Die Zeit Online.

"But realistically we are looking at having no good roads in time for 2012," he said. "From Gdansk (in Poland) to Donetsk (in the Ukraine) is more than 1,500 kilometers (930 miles). This is not like in Austria and Switzerland where everything lies close together."

Both countries were given a partial reprieve in September this year after UEFA's executive committee met in Bordeaux to discuss a progress report on preparations for the tournament.

"The executive committee reconfirmed UEFA's commitment to organize Euro 2012 in Poland and Ukraine," Platini told uefa.com. "At the same time, the committee stressed a number of conditions must be met in order to bring forward the whole project."

"If we don't have the stadiums in Kiev and Warsaw, that's a problem. Ukraine can't afford to send everyone to a country where there is no capital city (ready),'' Platini said. "They are working very hard and we have confidence in them. The president and the prime minister tell me it will be ready. What am I supposed to say? That I don't believe them?''

He added that the committee would review the progress again in May 2009. UEFA will then confirm the cities that will host matches.

Meanwhile, the Scottish FA has offered to step in to host the tournament if UEFA decides to look elsewhere.

Failure to host Euro 2012 is not an option in both Kiev and Warsaw. It would be viewed as a national embarrassment.