LONDON, England (CNN) -- Monstrosities, eyesores, nightmares of architecture -- call them what you like, ugly buildings are sadly all around us. 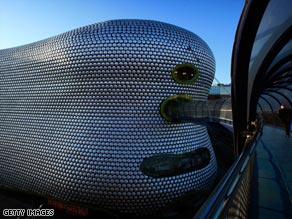 Worst in Britain: The Bullring Shopping Centre in Birmingham was voted as the country's ugliest building.

And you cannot simply define one category of hideous architecture. There is ugly, and then there is Ugly.

The latter often open in controversial circumstances: There may be protests from local residents, and there can even be calls to knock them down. Yes, these are the world's ugliest buildings.

From the divisive Millennium Dome (02 Arena) in London, to the Rock and Roll Hall of Fame in Cleveland, and the incomplete Ryugyong Hotel in North Korea -- we have compiled a gallery of ten of the world's ugliest buildings for your viewing displeasure.

Although the buildings shown are scattered across the globe, they share several things in common. All of them had big budgets, most were attempts at creating contemporary or futuristic styling, and they have all divided opinion among local residents, architects, and the general public.

• Click here to see photos of the world's ugliest buildings »

And these largely unpleasant buildings should not be treated as a joke.

Sometimes the architecture can have a grave impact on the perception of a city or region. Birmingham, in the Midlands of the United Kingdom, for example, was recently voted the ugliest city in the country through a national poll.

This came after the city's Bullring Shopping Centre and the Birmingham Central Library were named as the number one and two ugliest buildings in the country.

And far from it being a case of the rest of the country bashing the area, in a local poll some 40 percent of local residents agreed that their city was home to the single ugliest building in the country.

Do you have any ugly buildings you would like to name and shame?

Let us know what you think of the buildings in our photo gallery and tell us some others that could make it by posting a comment in the Sound Off box below. We'll publish the best.