MADRID, Spain (CNN) -- Barack Obama sometimes gets ribbed for his outsized ideas, like the massive stage built in Denver, Colorado, to accept the Democratic presidential nomination. But an artist in Barcelona, Spain, may be about to outdo the candidate himself. 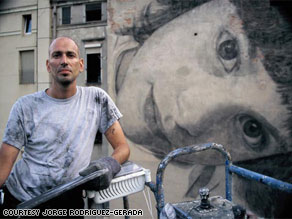 Large-format sketches have long been a focus of artist Jorge Rodriguez-Gerada's work.

The artist plans to create a gigantic face of Obama sculpted from gravel and sand, which will cover nearly 2.5 acres (1 hectare) of Barcelona beachfront before the U.S. elections.

"The size of the piece is intrinsic to its value," the artist, Jorge Rodriguez-Gerada, said Saturday.

He hopes it will be big enough to be seen on Google Earth.

"Obama's personality -- his youth, personal history and message of a new politics -- has fused with the historical moment to create someone larger than life," says the artist's dossier about the work, titled "Expectation."

The huge size also alludes "to the global impact of this election," the dossier adds. iReport.com: What do you want to ask Sen. Obama?

Rodriguez-Gerada, 42, is a Cuban-born American who grew up in North Plainfield, New Jersey, near New York, and now lives in Barcelona.

The artist, who has long focused on large-format sketches and other designs, said he had been planning to put an anonymous face on Barcelona's Mediterranean beachfront but shelved the idea. Then, six weeks ago, he decided it should be Obama's face.

"Everybody's doing work about Obama," he said. "I was talking to my wife about the importance of this election internationally. It all came together."

The idea, that is. The execution of the project is still a work in progress, but with a lot of help pouring in.

The artist has created what he calls a "vectored image" from different photos of Obama, showing the candidate's face looking left over his shoulder.

He will use 500 tons of material -- mainly gravel but also sand and possibly some soil in black, brown and white tones -- to create the image on a flat piece of land slightly raised and overlooking the Mediterranean, near downtown Barcelona.

The artist and a Barcelona newspaper say the city has temporarily ceded use of the land for the project.

The materials have been donated, along with bulldozers and their drivers. The crews will initially spread the materials along white lines, and other markers that will be laid out according to the sketch.

Then, the artist's technical team will direct volunteers with garden rakes to put the final touches on the materials, making sure the various colors are spread properly on the ground in order to depict Obama's eyes, hair, cheeks and collar, according to the plans.

Rodriguez-Gerada said he'll need to raise about $18,700 (15,000 euros) for other costs, such as rakes and gloves for volunteers, documentation, even portable toilets for the crew.

He said it's his "biggest work ever, in scale and complexity."

He's a self-described political independent until recently, when he joined Democrats Abroad in Spain. But he added that the art project is his alone, without help from any political organization or campaign, and he won't be paid for it.

Rodriguez-Gerada said this project also aims to address the issue of "trying to find heroes with empathy for the problems of the world. We really need empathy from Barack Obama. There's a need to do positive things for the future."

Obama's giant face would be environmentally friendly, with all natural colors, so the materials could be recycled, the artist said.

Rodriguez-Gerada's not sure how long the face would remain in place in Barcelona, because the site is slated to be used for a new municipal building.

But even if the face isn't permanent, it might be the start of outsized artistic images of Obama.