LONDON, England (CNN) -- Paying for sex with trafficked or exploited women would become a crime under new laws proposed by the UK government Wednesday. 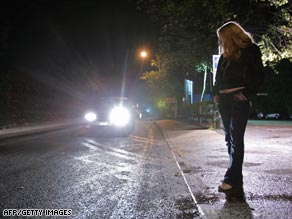 Under proposed laws, it would be illegal to buy sex from a trafficked or exploited woman in the UK.

The act of purchasing sex is not currently a criminal offense in England and Wales -- although there are laws against paying for sex in a public place and persistently soliciting prostitutes.

Britain's interior ministry, known as the Home Office, introduced the new measures Wednesday after a six-month review that looked at what else the government could do to protect women being exploited for sexual gain.

"I want to do everything we can to protect the thousands of vulnerable women coerced, exploited or trafficked into prostitution in our country, and to bring those who take advantage of them to justice," Smith said in a statement.

Smith said the new measures will shift the focus onto sex buyers because they create demand for prostitution and demand for the trafficking of women for sex.

"There will be no more excuses for those who pay for sex," she added.

As part of the review, the government looked at the experience of other countries including Sweden -- which has criminalized paying for sex -- and the Netherlands, where brothels are licensed.

The government estimates around 80,000 people are involved in prostitution in Britain, with about 4,000 women having been trafficked for sexual exploitation. It says the prostitution market nationwide is worth up to £1 billion ($1.52 billion).

Trafficking is the movement of women from one place to another for the purposes of sex. British Authorities have said trafficking usually involves the trafficker promising to bring a woman to Britain for a better life and then forcing her into prostitution.

The measures -- which must be approved by Parliament -- would mean that those committing the new offense would be given a criminal record and fined £1,000 ($1,520) -- even if it was a person's first offense and the offender did not know the prostitute was being controlled by a pimp or had been trafficked.

Police would also be given powers to close and seal premises suspected of being used for sexual exploitation, such as brothels, which the government said will prevent further exploitation and abuse from taking place.

Current law prohibits curb crawling, which involves soliciting prostitutes from a motor vehicle persistently or in a manner that causes annoyance to the neighborhood. It also prohibits "persistent soliciting," which is essentially curb crawling without a car.

But representatives of sex workers attacked the plans Wednesday, saying they will force prostitution further underground and make women more vulnerable to violence.

"It's going to really make it more difficult for men to use the sex industry, and it's going to mean that women are going to have to take more risks in order to earn the same money," said Cari Mitchell, a spokeswoman for the English Collective of Prostitutes. "It's also going to drive it underground. It's going to increase the stigma."

Mitchell said the government's figures are inflated, and that most immigrant women working as prostitutes have not been trafficked and are working independently.

The new measures, she said, confuse prostitution with trafficking and take the focus off those women who may be vulnerable.

"Of women who may be trafficked and forced, what they need is to be able to come forward and report to the police without any fear of being deported," Mitchell told CNN.

The new restrictions on curb crawling won't end the practice, Mitchell said, but simply give prostitutes less time to weigh up any potential dangers before getting in the client's car.

All About Human Trafficking