10 ideas that changed the world

LONDON, England (CNN) -- Imagine a world without zero: The magic number that has given us everything from simple algebra to quantum physics, which forms the basis of modern computing in binary code and which, less profoundly, but perhaps more importantly, lets us know when we've drained our bank account with one too many shopping trips. 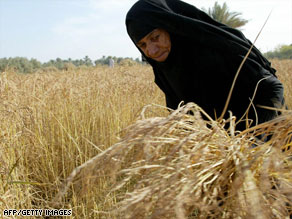 The Neolithic Revolution, the beginnings of modern-day farming, paved the way for the development of government and trading.

Zero is one of a number of concepts that have shaped the course of the world so fundamentally that we would not recognize modern life without them.

We have compiled a list of 10 ideas mankind should be thankful for. What ideas do you think changed the world?

1. Farming
Ask people what the most important historical revolution is and their answers might include: the Industrial Revolution, the Information Revolution, or maybe even the French Revolution. But without the Neolithic Revolution, none of the above would have taken place. It is this period of time, more than 14,000 years ago, which modern-day farming can be traced back to. Agriculture allowed hunter-gatherer societies to form permanent dwellings. With food no longer the sole motivation for existence, the way was paved for the development of government, trading and individual specialization.

2. The unconscious
When Freud, the father of psychoanalysis suggested that our behavior is not always ruled by our conscious thoughts, nor is it always in our best interests, he formed the basis of the idea that individuals can be curious about themselves and make a study of their own minds. He thought people talking in certain situations could let out ideas from the unconscious in dreams or through slips of the tongue -- hence the term "Freudian slip." His ideas have permeated pop culture to such an extent that much of what we understand about the sexes, relationships, films and books can be seen as reflected through a Freudian mirror.

3. Relativity
Albert Einstein's E=mc2 is probably the world's most famous equation. Deduced from his theory of relativity, it suggests that tiny amounts of mass can be converted into huge amounts of energy. The theory has had an enormous impact on society: it paved the way for the development of nuclear power, which, although controversial, has alleviated a portion of society's reliance on non-renewable energy like coal and oil. Atom bombs aside, it has also had huge applications for the military -- like the synchronization of the global positioning system (GPS) which is a network of satellites transmitting radio signals at the speed of light to receivers around the globe. So, next time your handy in-car navigation gadget guides you home flawlessly, remember, you have Einstein to thank for not getting lost.

4. Vaccination
Today vaccines are widely available for common illnesses which were once life-threatening, as well as for more severe conditions like cervical cancer. The origin of vaccines -- which involve introducing an antigene which encourages the body to produce antibodies boosting the body's immunity to a particular disease -- is thought to be 17th century India, when powdered smallpox scabs were used to inoculate people against the disease. Modern humans owe better healthcare and longer life-spans to this innovation.

4. Human rights
Although the concept of human rights has been batted around by philosophers for centuries, one of the first modern milestones was the UN's "Universal Declaration of Human Rights," which reasserted the concept after the horrors of World War II. The movement's next landmark moment was in 1961 when British lawyer Peter Benenson wrote a newspaper appeal, "The Forgotten Prisoners," calling for an international campaign to fight the imprisonment of people for their political and religious beliefs. There were thousands of responses and Amnesty International was born. Since then, other organizations like Human Rights Watch have spun off from Amnesty, performing vital work standing up for people who are unable to stand up for themselves.

6. Evolution
Once described as "the single best idea anyone has ever had," English naturalist Charles Darwin's "Theory of Evolution" proposes that all life, including humans, is related and is descended from a common ancestor. Prior to Darwin's theory, published in "On the Origin of Species" in 1859, it was accepted that man came from an archetype created by God, and was set apart from animals. Darwin's theories showed creation had taken longer than the Biblical seven days and that man was, in fact, likely to be be descended from apes. As well as launching a revolution in biology, his idea irrevocably shook the human race's conception of where they come from.

7. World Wide Web
In a matter of decades since it was invented in 1989 by English scientist Tim Berners-Lee, the World Wide Web has grown from a few pages to somewhere in the hundreds of billions, according to best guesstimates. In among all those pages exist a myriad of sites giving people access to information and opportunities that didn't exist previously. Although not all the freedoms available on the Internet are positive, the fact that in the present anyone can be, for example, a journalist, a dj or a filmmaker is changing how we live daily. Only time will tell, however, the full impact of this revolution on human society.

8. Soap
Difficult to imagine, or for that matter, smell, a society without soap. It dates back to Biblical times but, the great soap-related hygiene revolution didn't happen until the mid-19th Century when Ignaz Semmelweis, a sharp Hungarian doctor working in Vienna, noticed babies died more often after they were delivered by medical students rather than midwives. He realized medical students had often performed autopsies just prior, which contaminated their hands with microbes. He instigated a regime of hand-washing and infant deaths dropped substantially making clear the benefits of hand-washing.

9. Zero
Although zero has been around since the time of the Babylonians, it didn't infiltrate Western thinking until the 12th Century when Italian mathematician, Leonardo Fibonacci included it in his book "Liber Abaci." Once it was finally adopted, it paved the way for the concept of decimals, allowing mankind to advance its knowledge of mathematics and logic. It has also given us everything from simple algebra to quantum physics and rocket science to binary code, the basic language of all modern computers.

10. Gravity
The well-known story of the apple that fell on Sir Isaac Newton's head inspiring him to come up with the "Universal Law of Gravitation" is probably apocryphal. However it happened, here is no doubt that Newton's insight was brilliant: He supposed that if gravity could reach to the top of a tree to make an apple fall to the ground, perhaps it would reach into orbit and beyond to affect the orbit of the Moon. We now know that gravity affects everything from the tides to convection, and Newton's equations are still used for things like making heating systems more efficient to sending satellites into orbit.

Fei Phoon and Patrice Poltzer contributed to this story.