Airbus A320 crashes into sea off France

PARIS, France (CNN) -- A plane with seven people aboard crashed into the Mediterranean Sea on Thursday, a French regional government official told CNN. 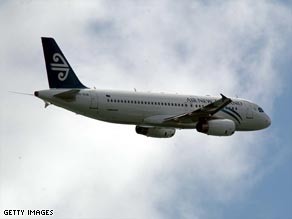 A New Zealand Airbus 320 flying into Auckland from France, from a file picture taken in 2003.

The Airbus A320 jet was on a training flight when the crash occurred about 5 p.m. (4 p.m. GMT), said the official at the Maritime Prefecture in Toulon, France.

There were no immediate reports of survivors, but rescue efforts involving French navy vessels and a helicopter were launched. Floating debris had been located, the official said.

Airbus confirmed the crash in a written statement, saying the jet was owned by Air New Zealand and operated by XL Airways Germany.

"The aircraft was operating a local technical flight from Perpignan, France," the company said. The Airbus statement did not say how many people were thought to be on board.

See a map of where the flight originated »

The twin-engine plane involved in the accident had accumulated about 7,000 flying hours, Airbus said.

Learn more about the Airbus A320 »

"At this time, no further factual information is available," Airbus said. "In line with international convention, Airbus will provide full technical assistance to the authorities of France, who will be responsible for the investigation into the accident. A team of five specialists from Airbus is being dispatched to the site."

People in a civilian vessel saw the crash take place off the coast near Perpignan, the French government official said.

"The investigation remains the entire responsibility of the relevant authorities, and it would be inappropriate for Airbus to enter into any form of speculation into the cause of the accident," the Airbus statement said. "The concerns and sympathy of the Airbus employees go to the families, friends and loved ones affected by the accident."

All About Airbus A320 • Air New Zealand Ltd.