(CNN) -- Venice has suffered its worst flooding in 22 years, leaving some parts of the historic Italian city neck-deep in water, reports said Monday. 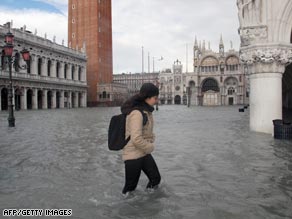 Strong winds pushed waters to a high of 1.56 meters (5 feet 2 inches) at 10:45 a.m. local time, prompting the city government to issue warnings to the public, the agency said.

The flood level began to drop soon afterwards, prompted by a change in the direction of the wind.

Watch more about the flooding »

Venice, built around a network of canals and small islands, has for years been trying to tackle the problem of floods that have regularly blighted the city.

It said that unless the problem is tackled, Venice could be flooded daily and water levels would permanently rise by 54 centimeters in the city by the year 2100.